Since it seems like Bowman Chrome isn't being released in retail this year, at least not in any of my local stores, I recently picked up a box. It seems like this is a product that continues to fall flat on it's face every year. At least it has since the big releases that had Strasburg and Harper. I'll let the cards speak for themselves mostly. 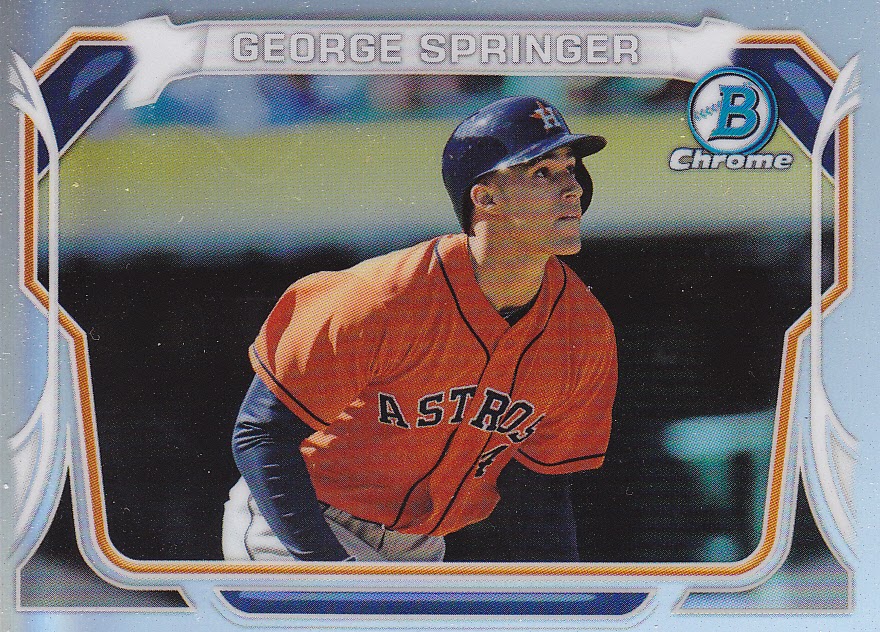 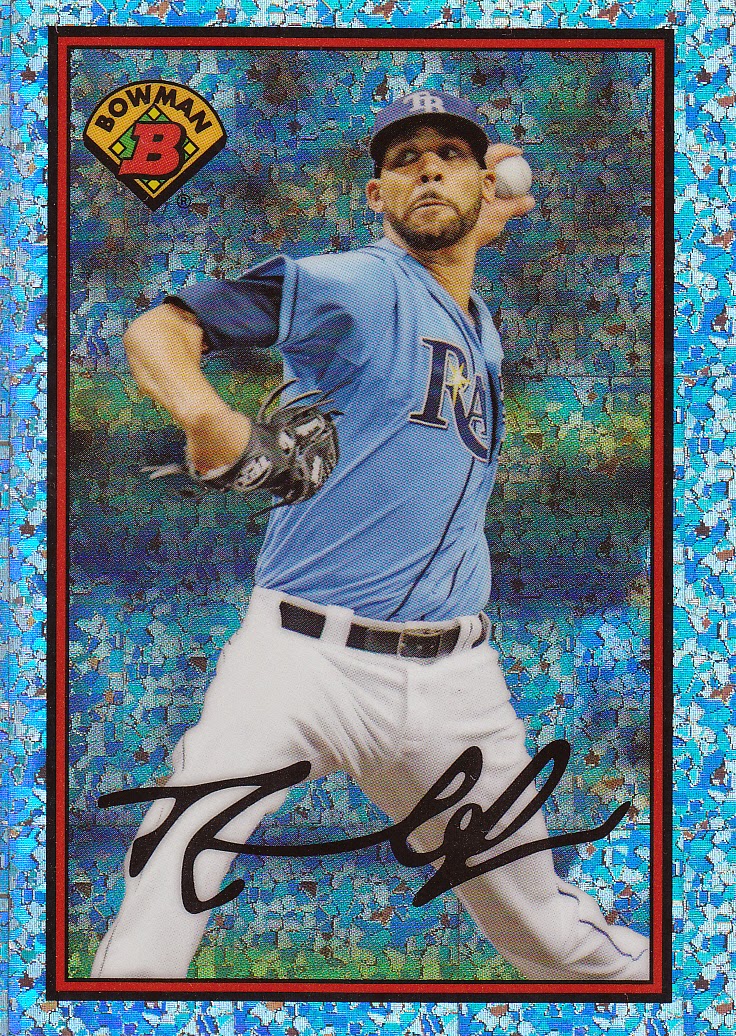 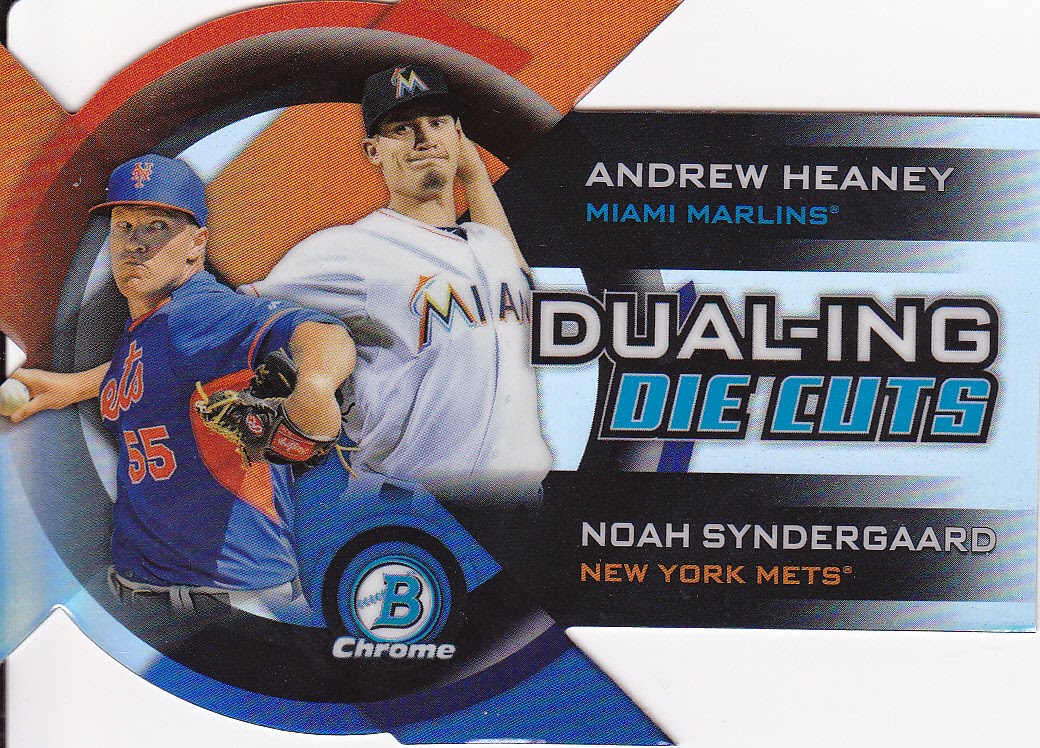 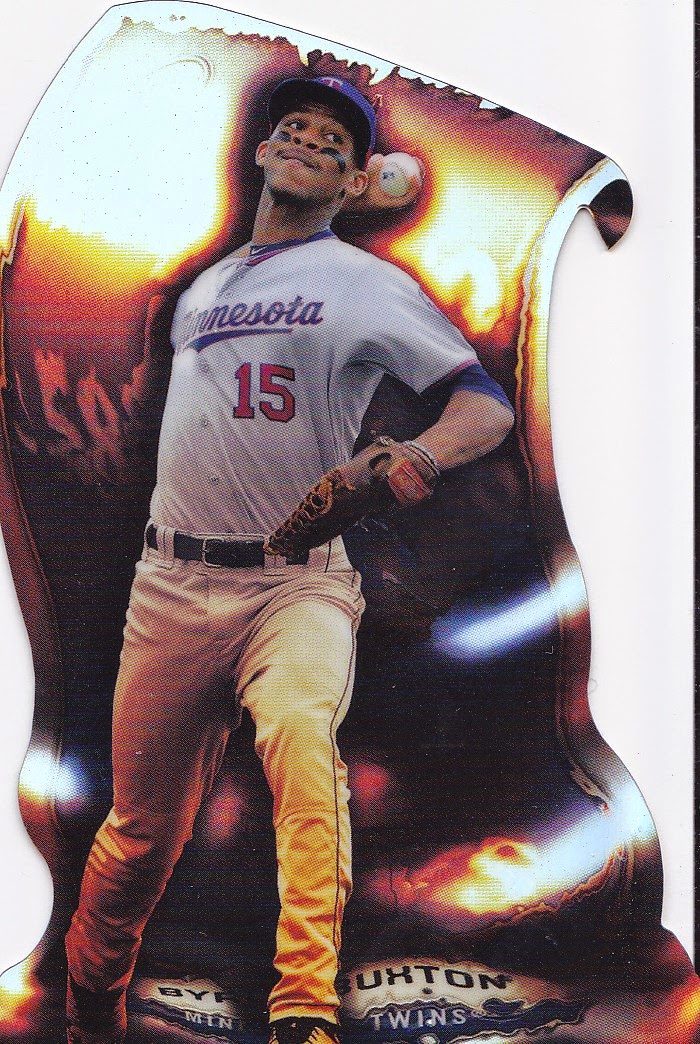 The thing about the ever evolving die-cut shapes is that while some of them look pretty cool, they're a nightmare to get into a penny sleeve. 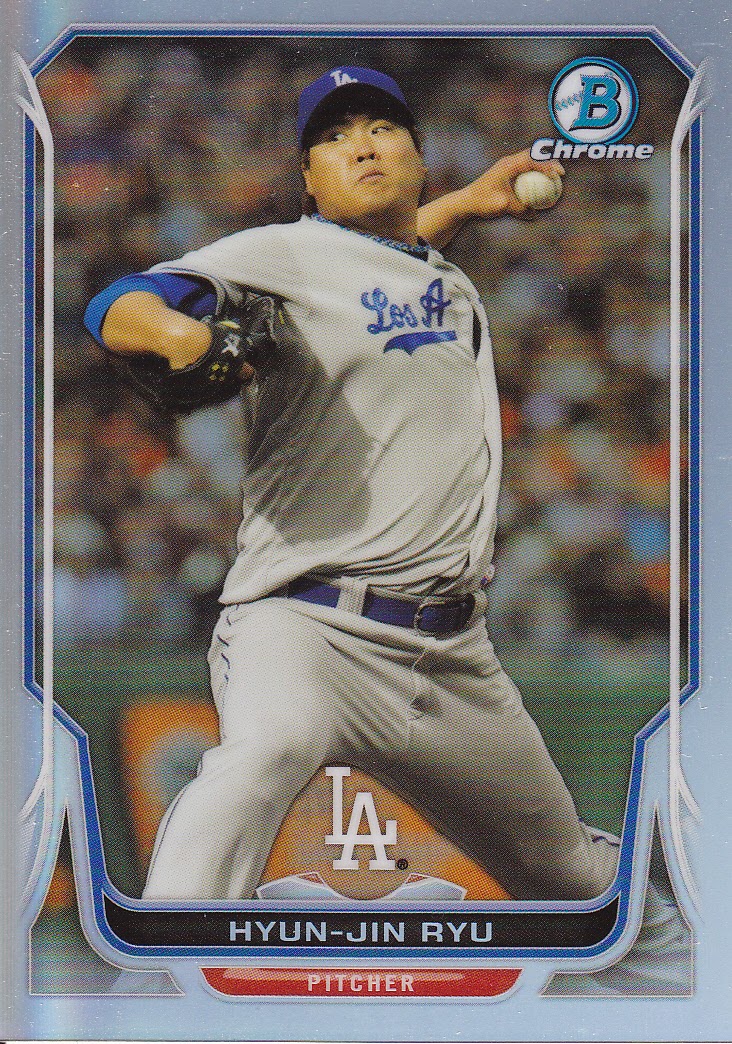 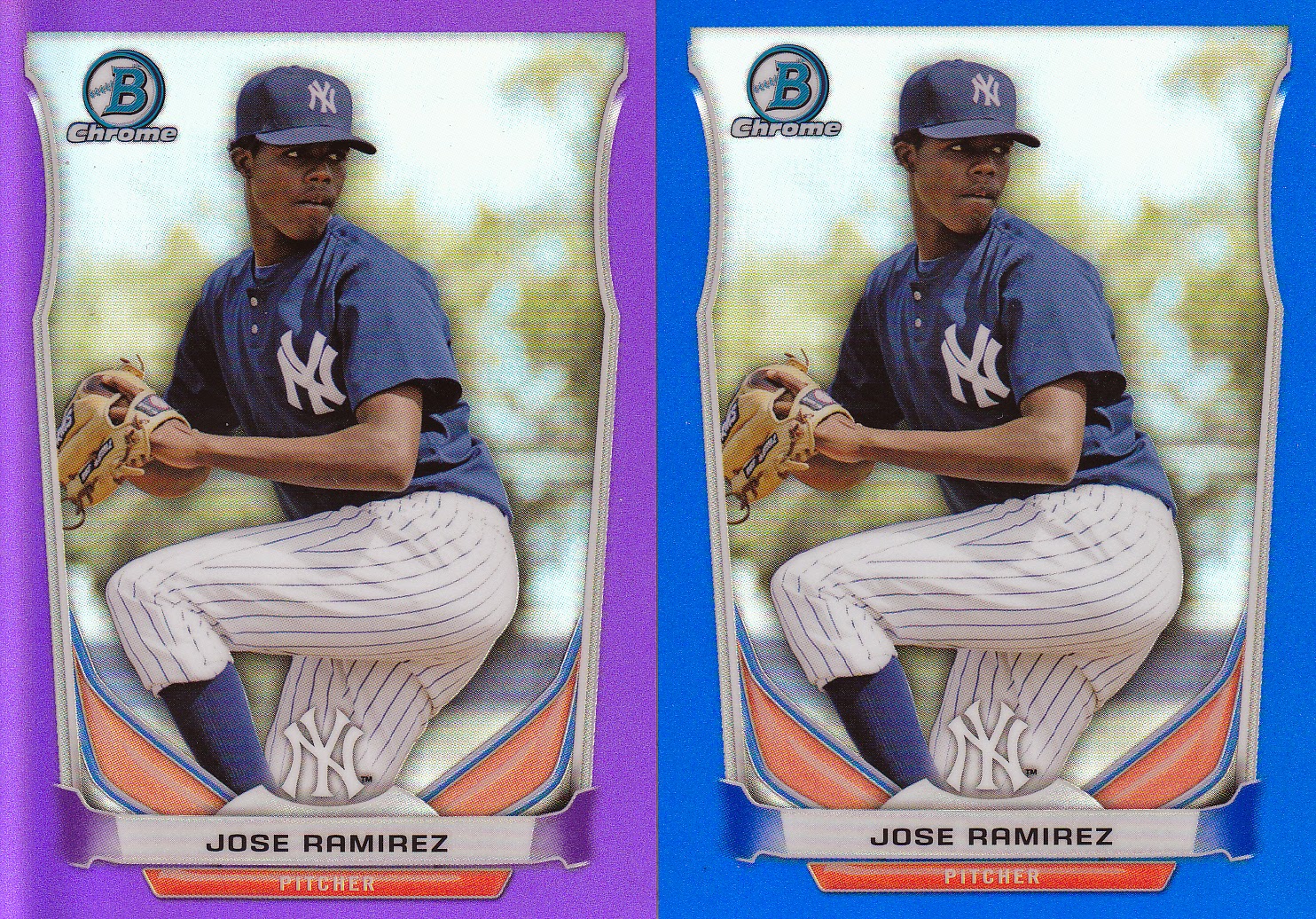 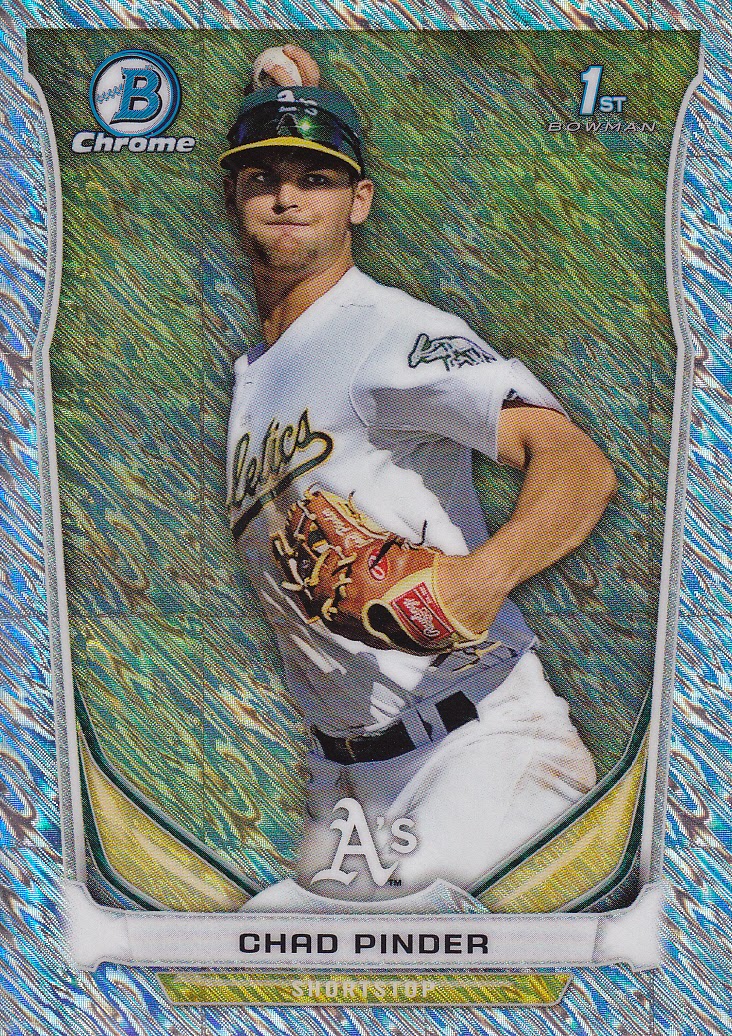 Static Wave Refractor (or whatever the heck it's called) 13/15

I find it strange that Topps decided to add a whole bunch more parallels but make even the basic refractors serial numbered. So while each individual parallel is rarer, I think you actually get more serial numbered cards per box than in previous years. 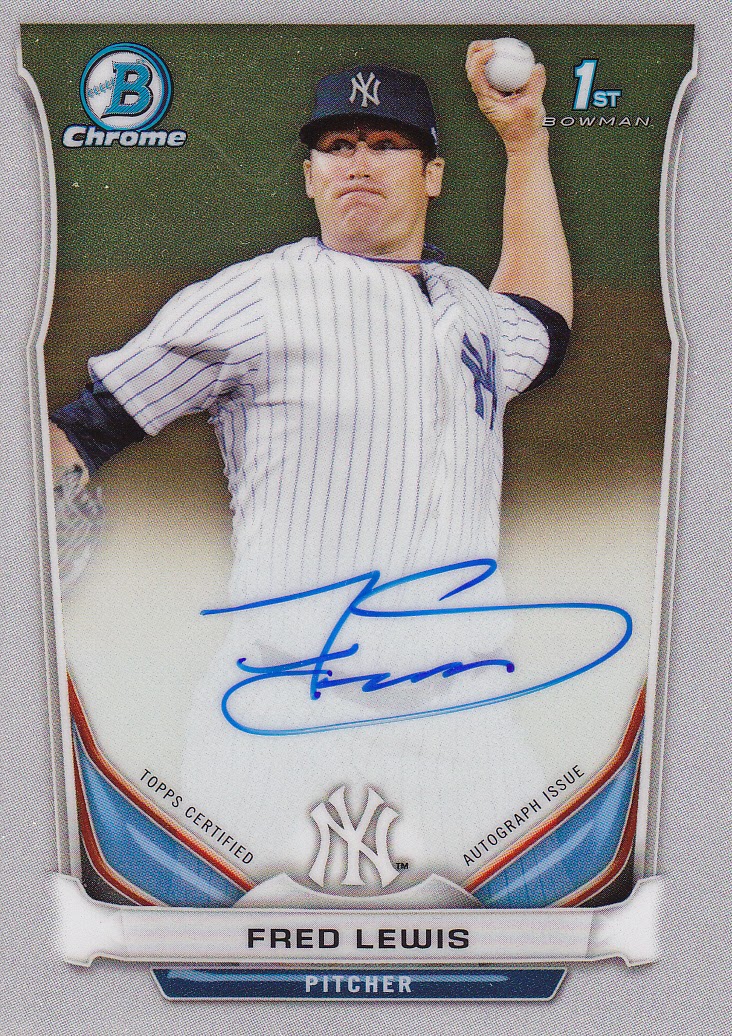 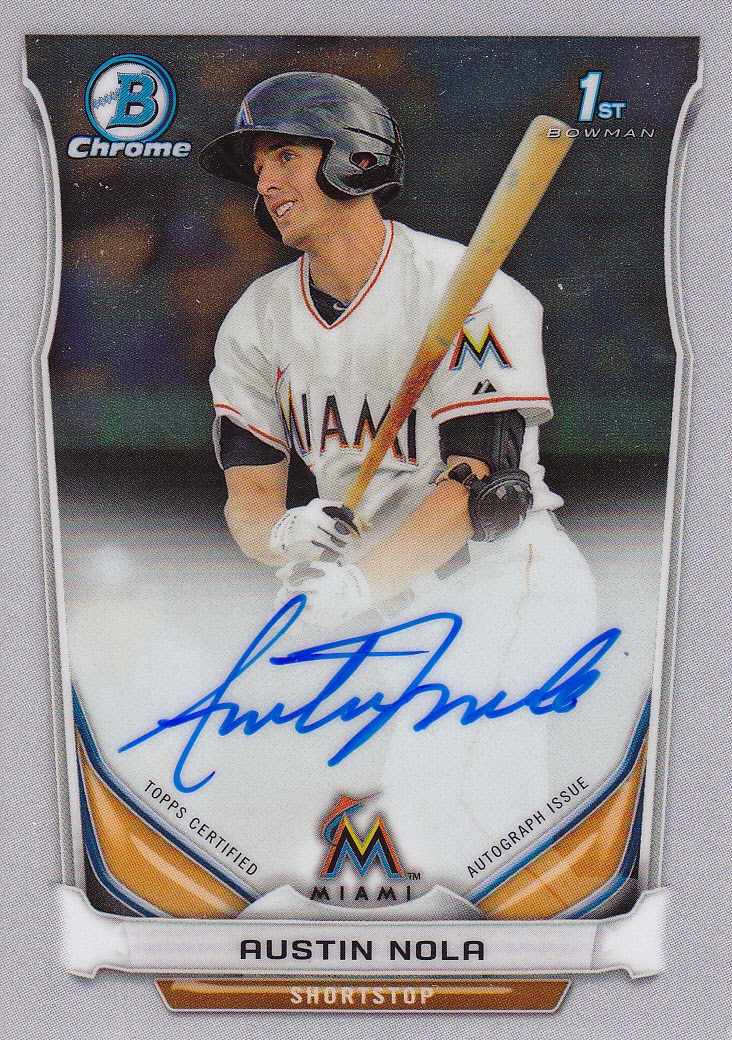 Topps gave themselves away that they have these players sign all these cards at the same time as the regular Bowman release since the backs of the auto cards are the same as '14 Bowman and not the Sabermetric centric backs on Chrome. Both of my auto cards were also damaged out of the pack just like most people's it seems. One side on the backs is peeling up like they were exposed to water at some point. But since it seems to be a common problem and I'm not a reseller, I'm not worried about it. On the positive side, both of these guys have nice looking signatures.

All cards pictured as available for trade. And if anyone needs any base let me know and I'll see if I have it.

On a super negative note, I did not get a single Braves card in the entire box. *ANGRY FACE*
Posted by Need More Cardboard at 12:42 AM 3 comments:

When I got back into the hobby early last year I read about redemptions and thought, that's cool. I learned pretty quickly that redemptions are in fact, not cool. Not cool at all. Well since returning to the hobby I've pulled a few from Topps and Panini. This past week I got my first fulfilled redemption. This one came from a discounted blaster of 2013 Panini Prizm that I picked up at Plastic Mart. I received the card just two weeks after entering the code online. Good turnaround time from Panini. 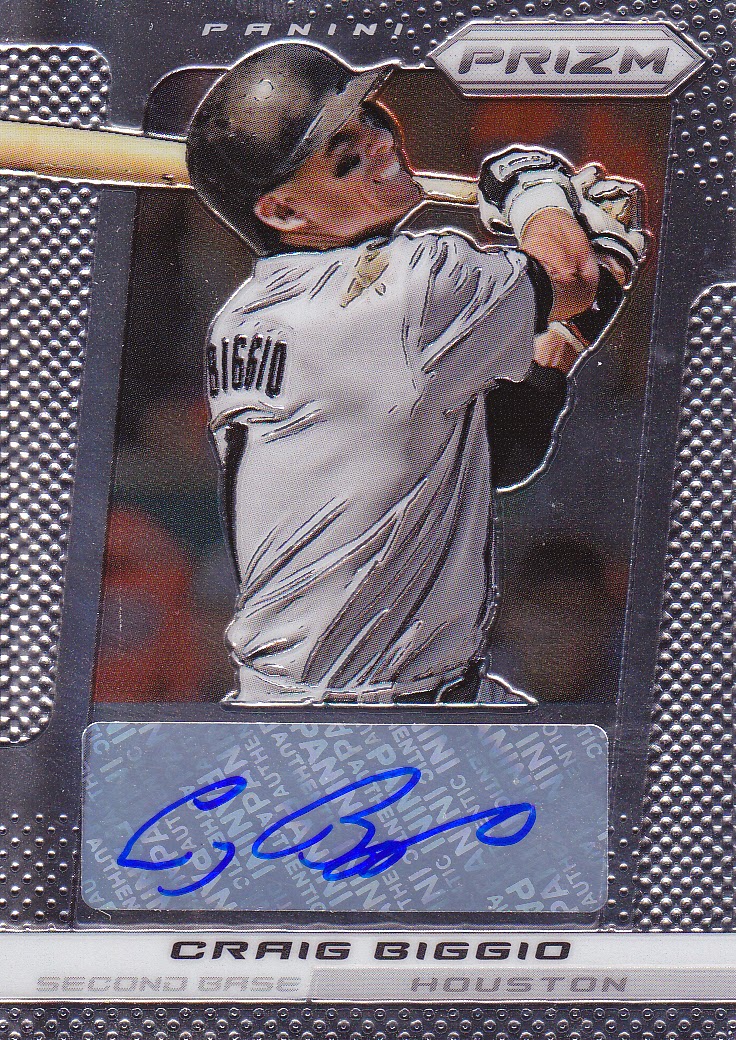 Biggio makes a nice addition to my collection. As a kid I admired Biggio for his scrappy "team first" style of playing. I'd been wanting his auto but hadn't actively pursued it. Here's to hoping the BBWAA does the right thing and puts him in the HoF.
Posted by Need More Cardboard at 11:26 PM 2 comments:

On my last Wal-mart trip I saw that they had added some discounted blasters to the stock. One was a box of 2014 Topps Olympic Team and Hopefuls. The box promised 7 packs + one Olympic team relic, auto or commemorative relic. Since I'm a big fan of the Olympics I said why not. The weird thing is that the box actually contained 8 packs but the odds made it appear that each box should contain a hit. Well I pulled this beauty...of a beauty. 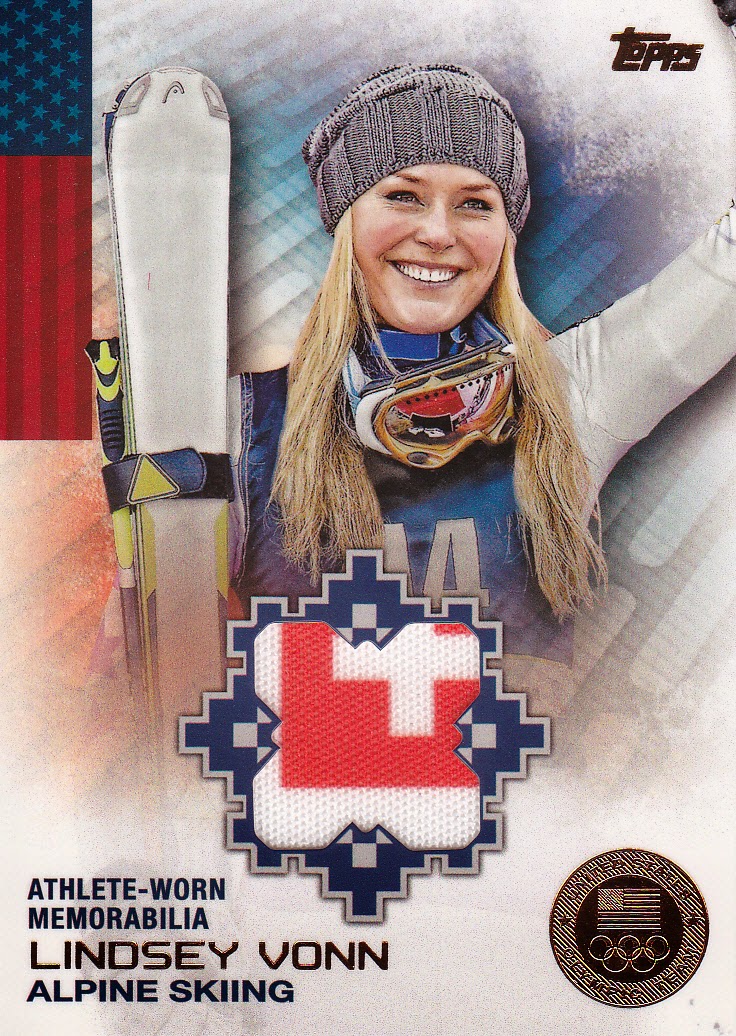 Since ski racers definitely don't have physical patches on their suits I would still consider this a patch card, and a pretty sweet one at that.

Fun fact: I know a girl that looks just like Lindsey Vonn. She's way out of my league.
Posted by Need More Cardboard at 11:54 PM 6 comments:

The best bargain in the hobby: Part 2

Yesterday I posted about the guaranteed hits from the eight Target repack boxes I picked up over a couple days. Those cards were nice and definitely added value to the boxes. But the purpose of buying repacks is the meat, that is, the packs. And you can't beat 20 packs for $20 when most of those packs originally sold for more than a dollar each and some for as much as $4. Now I understand that a lot of repacks end up being duds. I've had quite a few myself that ended up that way. You guys know what I'm talking about. Those breaks where when you finish ripping everything and all you can say is, "well that sucked." But in these eight repacks I hit the jackpot.  Before showing the cards I'll preface that these boxes generally contained around 10 packs of 2012-14 Topps flagship and Opening Day including one hobby pack or flagship, two 2013 Topps Archives packs, one pack of 2009 UD Spectrum, five packs of 2013 Allen & Ginter, and two packs of either 2013 Topps Heritage or Gypsy Queen. There was some variation here and there with a pack of a different year or set thrown in.

First up we'll start with the SP variations. 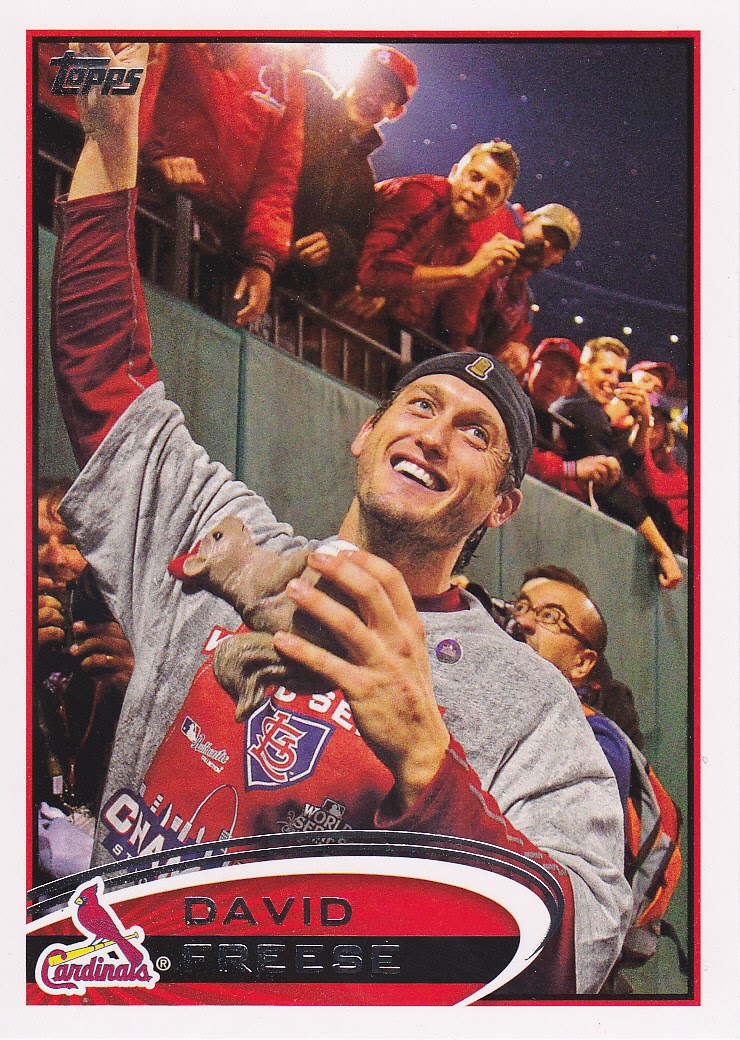 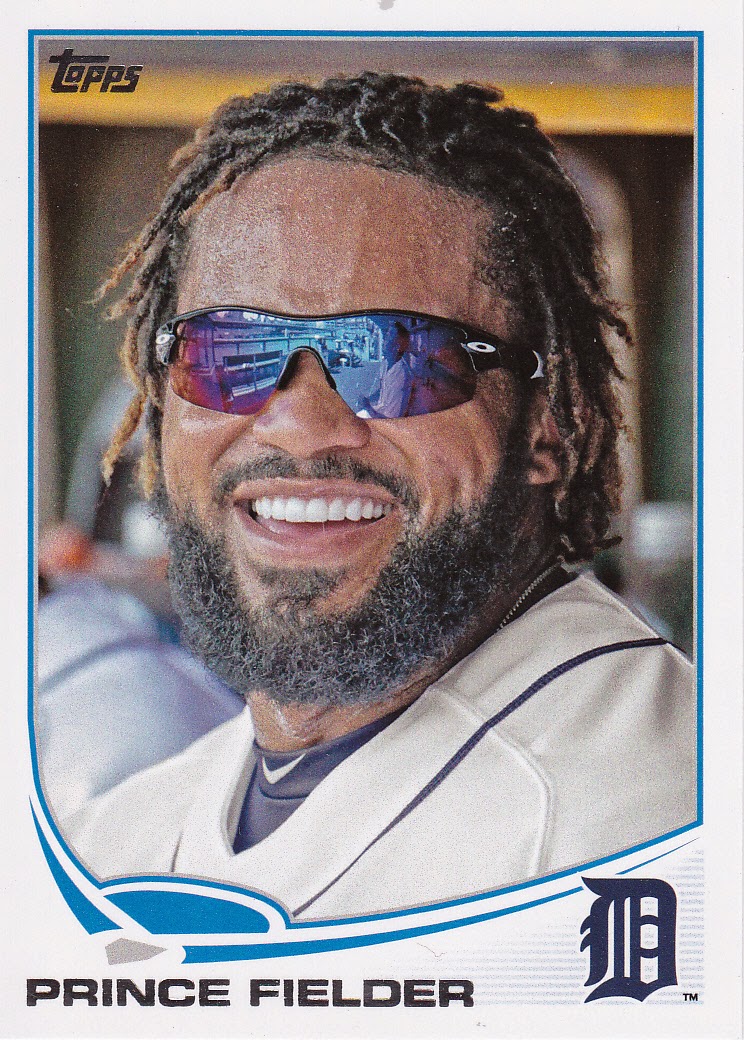 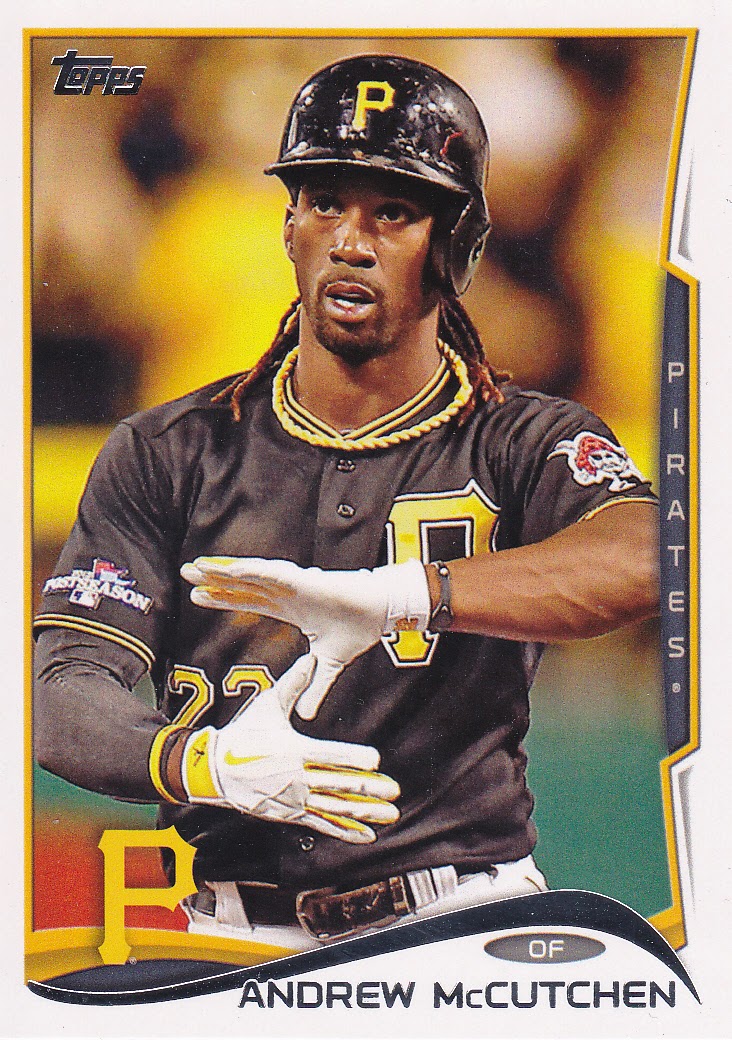 Unfortunately the McCutchen came out of the pack with a dinged corner. 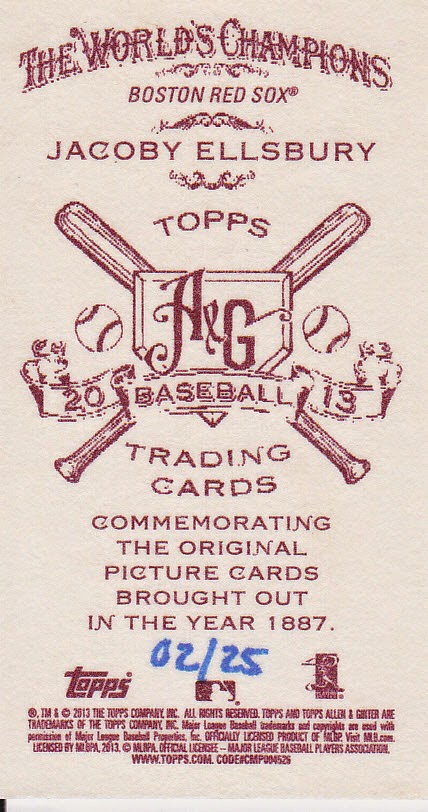 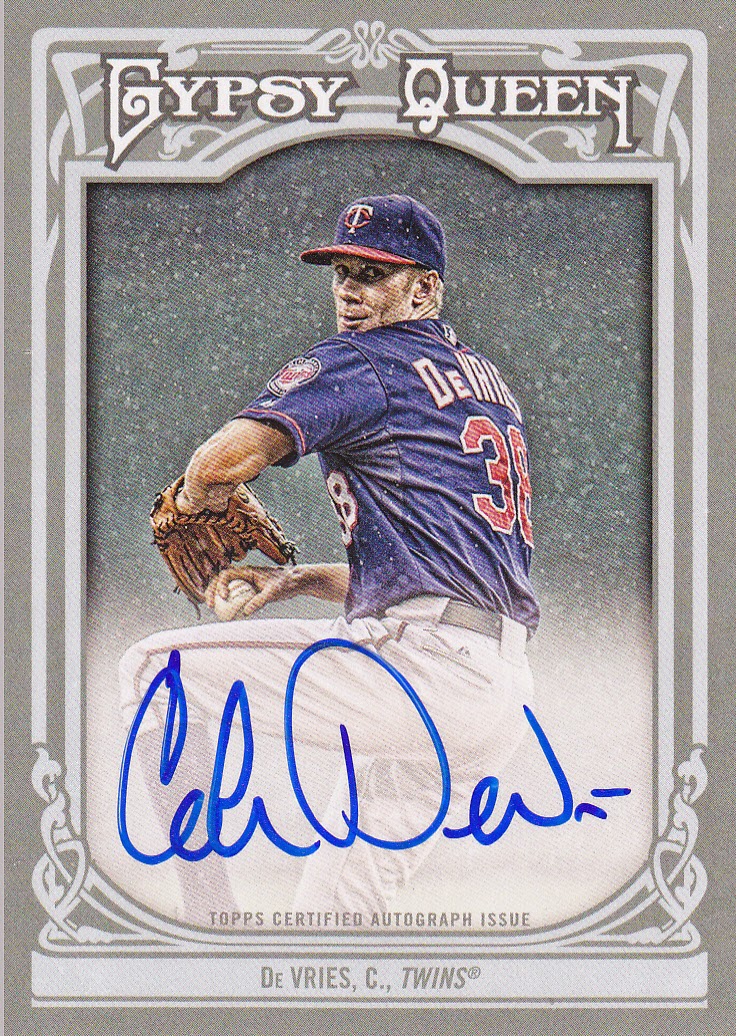 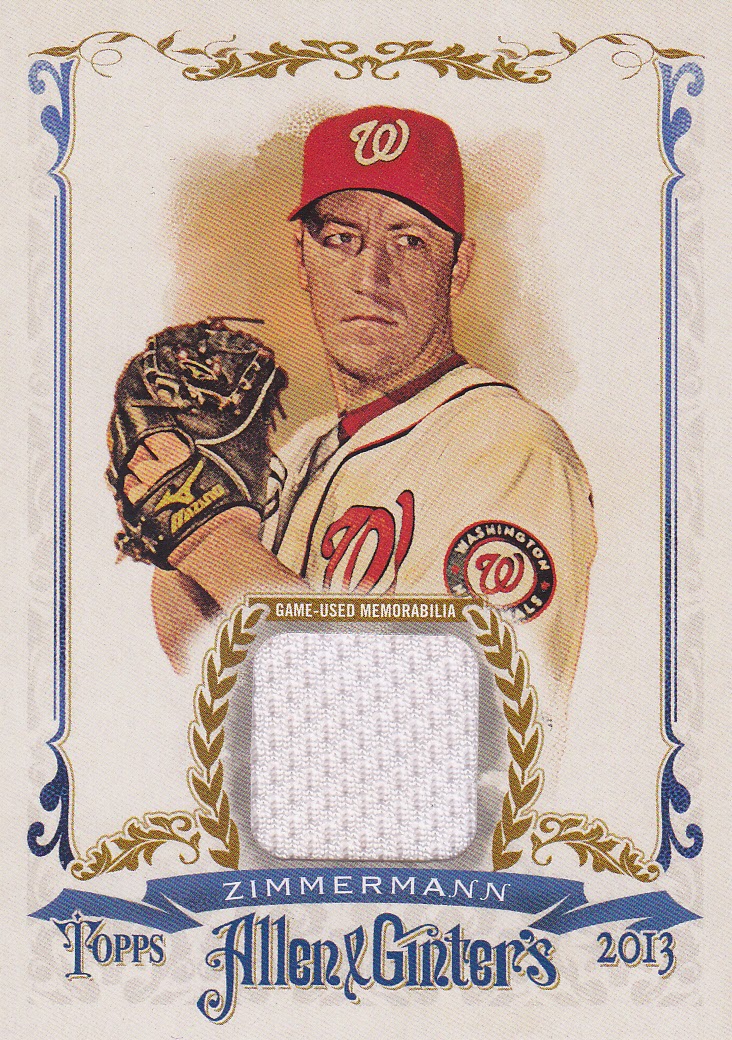 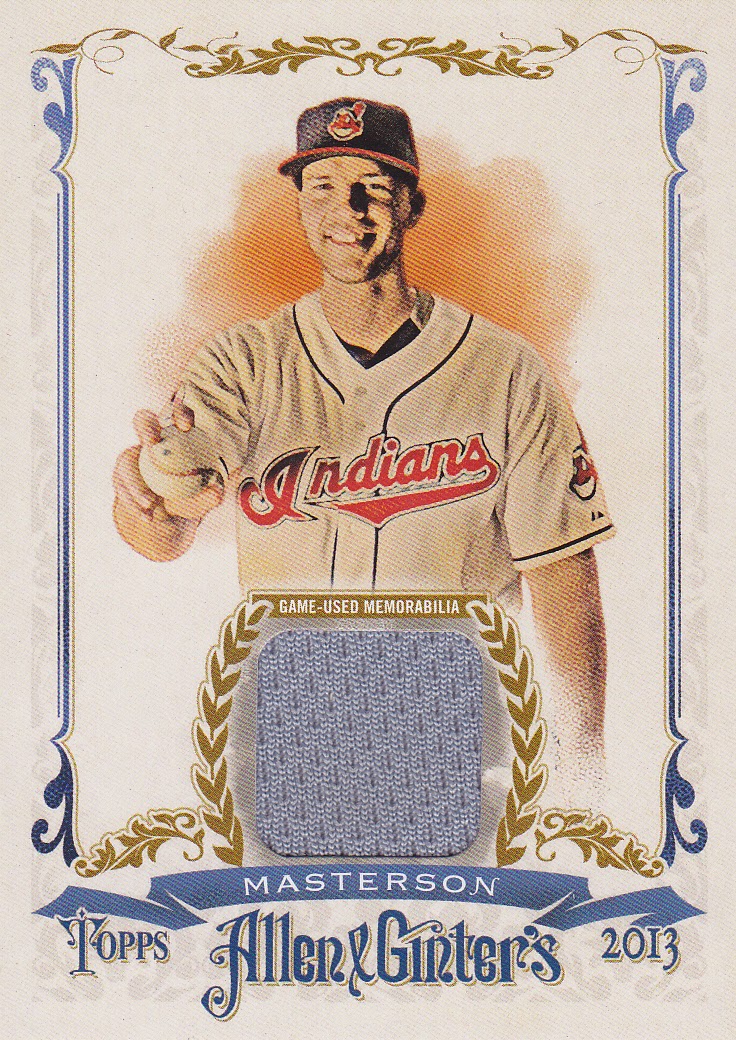 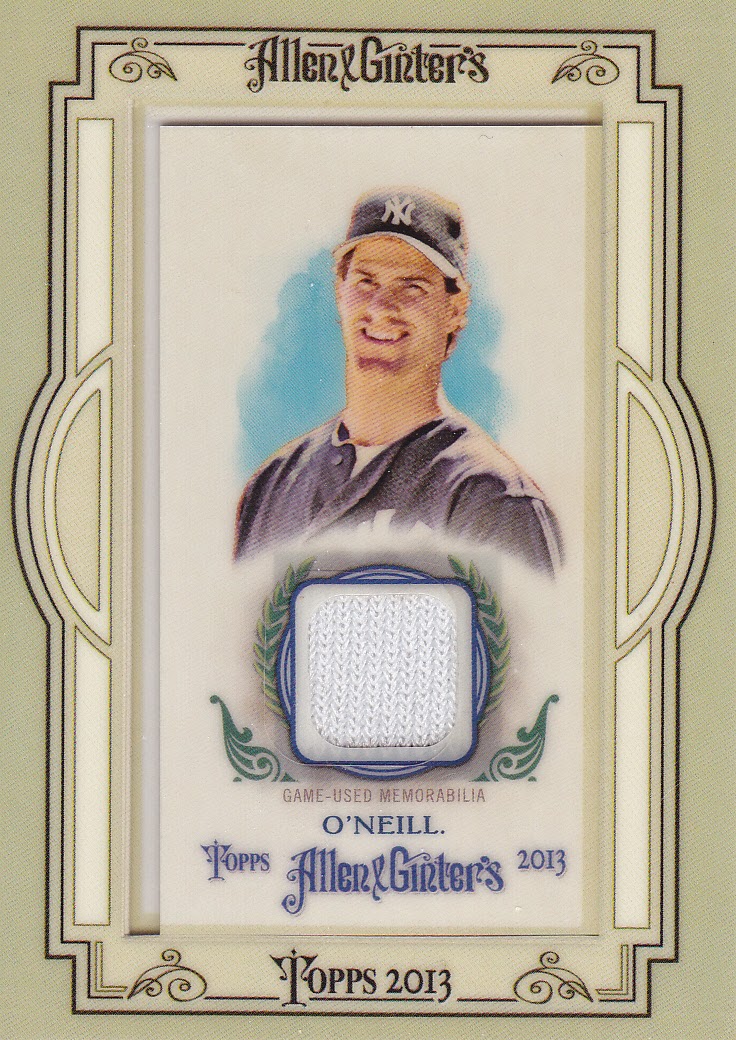 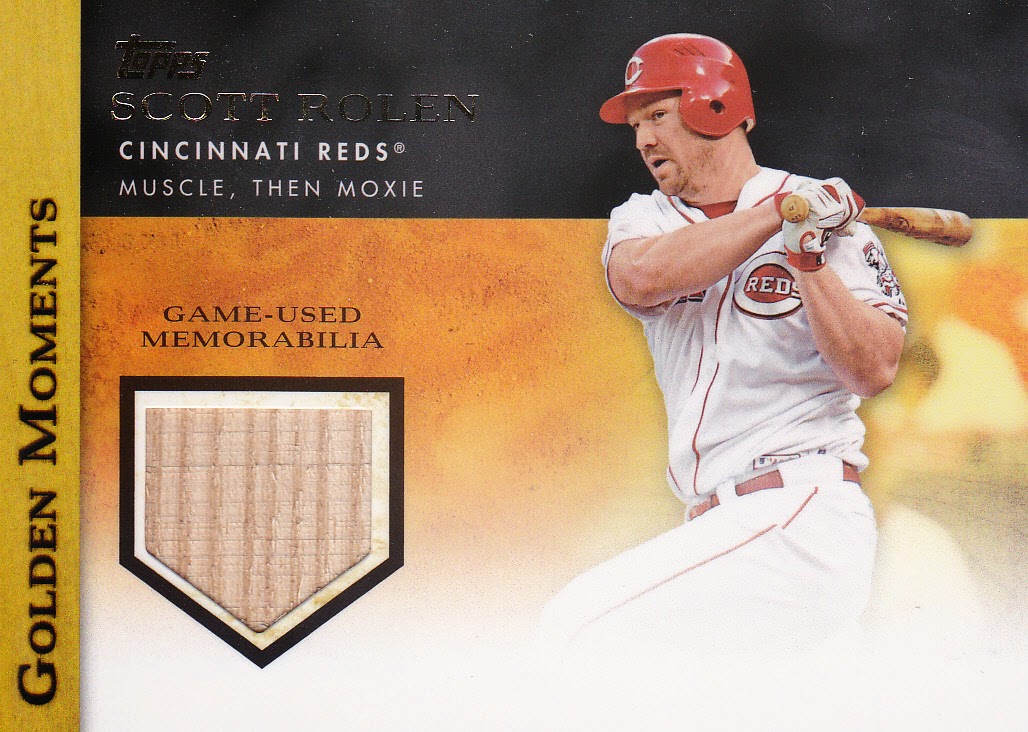 This one actually came from a hobby pack which really surprised me. I assumed that the hobby packs in these boxes were just remainders after the hit from the hobby box had been pulled. 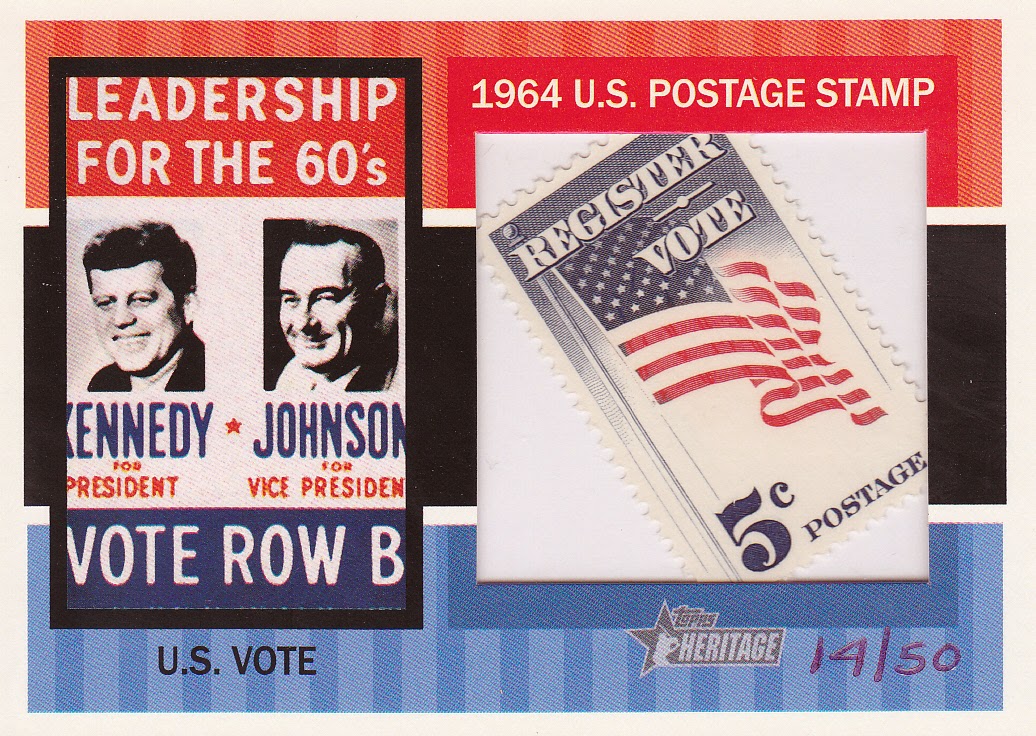 This was a really cool card to pull. Hand numbered 14/50. 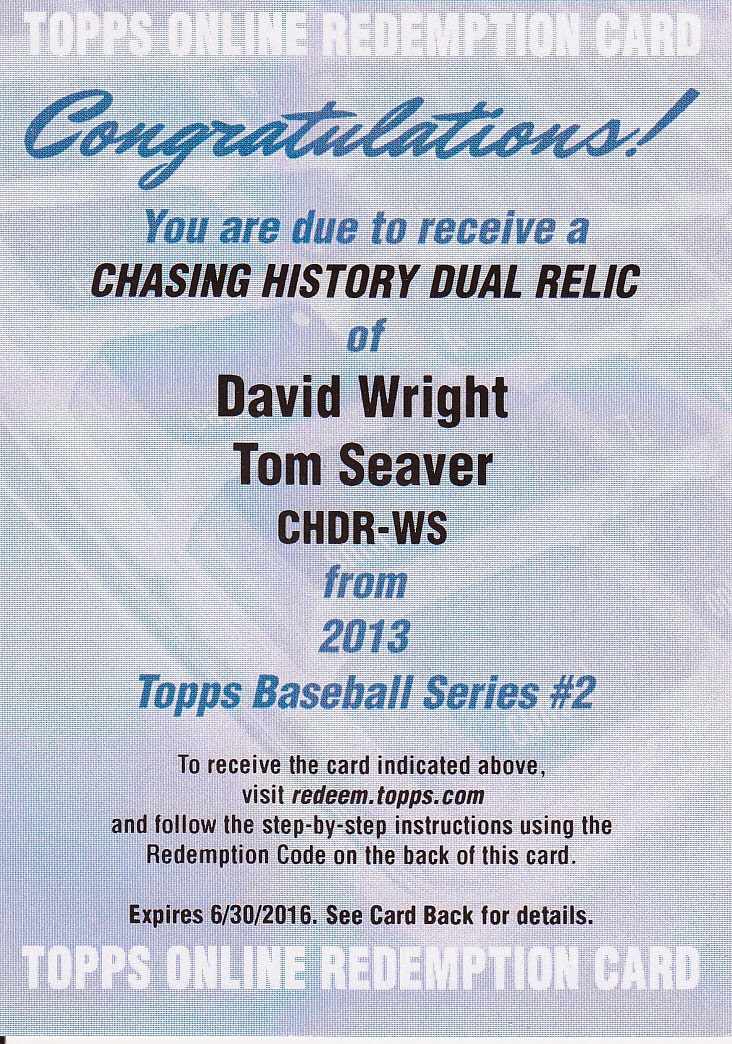 Not sure what to do with this redemption. They're #/50 but so far as I can tell this card hasn't been made yet. I assume because Topps hasn't managed to acquire a Seaver jersey yet. Some of the other cards in the set have been made and some even include patches so I think this card would look really sweet once made. But who knows. I haven't scratched the code yet but I think I probably will because I'm sure I could get something good as a replacement if the card is never made. That is, unless a Mets fan makes me a killer offer for the redemption. =)

Like I stated before, I know the majority of repack boxes don't turn out like these did. But...DAMN!!
Posted by Need More Cardboard at 1:30 AM 4 comments:

The best bargain in the hobby

Repacks. Yep. I really feel like these are the best bargain in the hobby. But not just any repack. I've noticed that the Wal-mart $20 are steadily decreasing in value. First they were 12 packs + 4 rack packs. Then it was 12 packs and two random hits. Then it was 11 packs. And now the repack boxes my local Wal-marts have are 8 packs and 4 rack packs...for $20. What's worse is the packs visible in the windows on the box are things like Panini Triple Play and 5 card Topps flagship packs from drug stores. I'm not going to waste my money on these anymore.

Now you're probably wondering why I was talking about great value but went on a rant about the decreasing value of repacks. Well while Wal-mart is getting stingy, Target remains strong as ever! I LOVE Target repacks. 20 packs per box and a random hit. And the boxes I've bought haven't contained anything older than 2007. Well recently I bought four of these boxes in one go and did so well that the next day I went back and bought the other four they still had on the shelf. First up I will show the guaranteed hits that were in the boxes. The next post will have all the awesome cards I pulled.

These were the guaranteed hits (one per box) 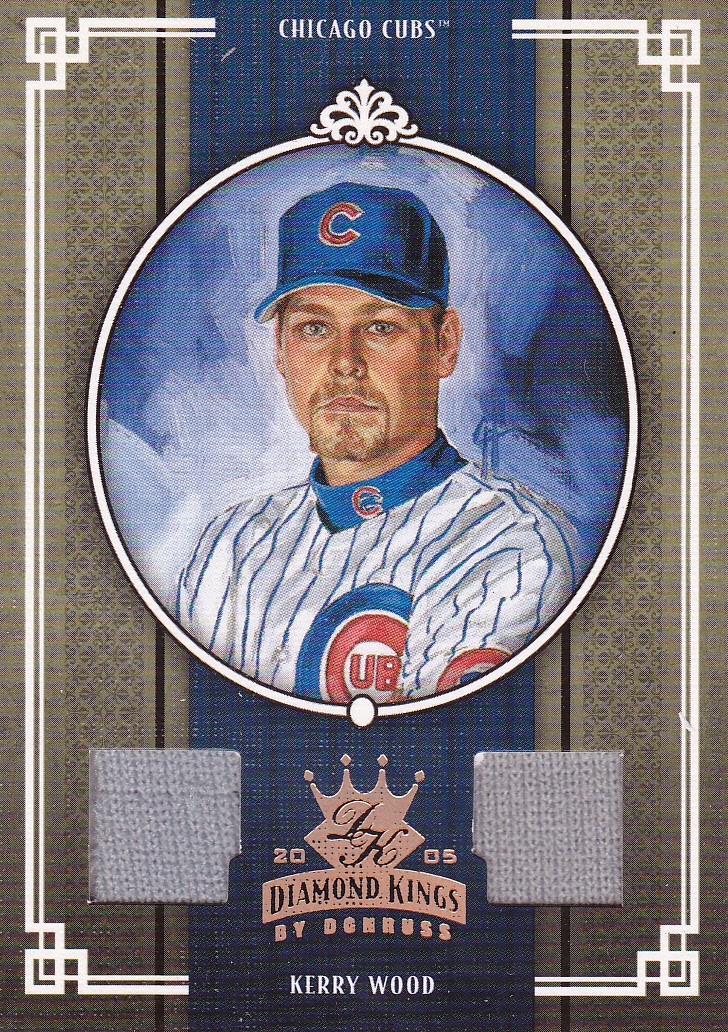 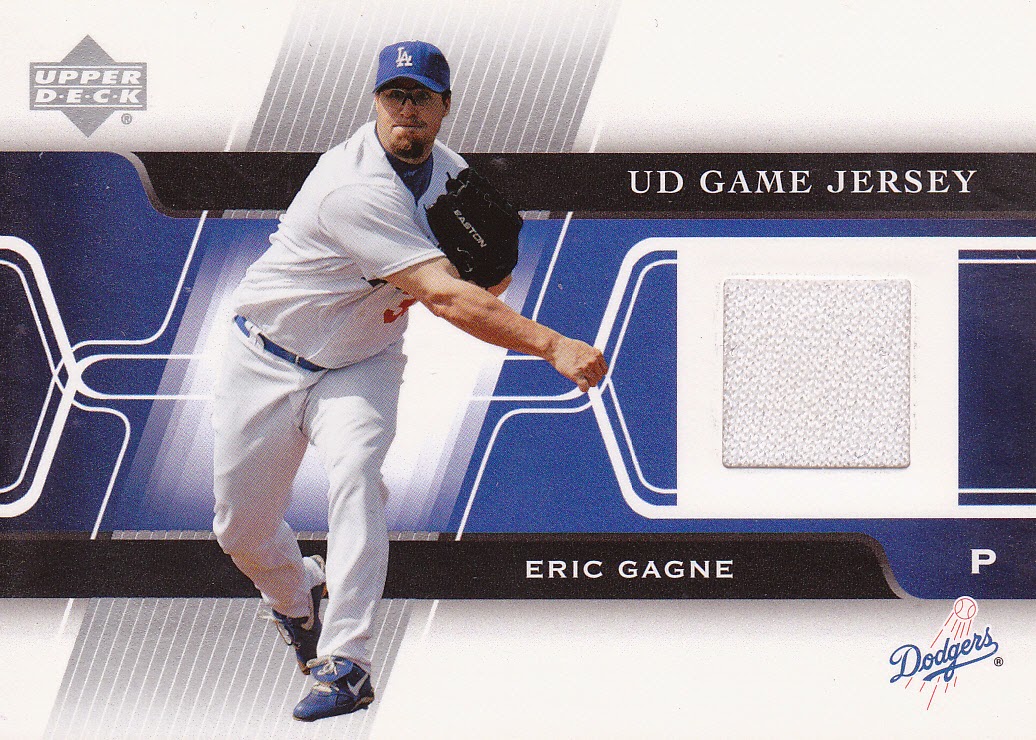 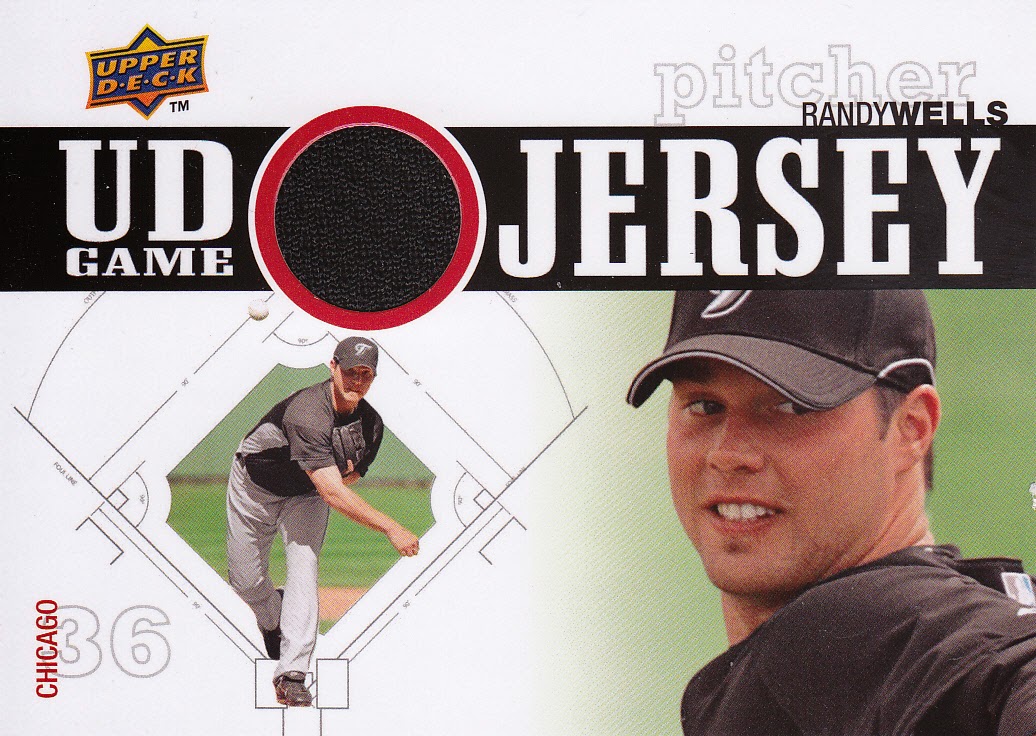 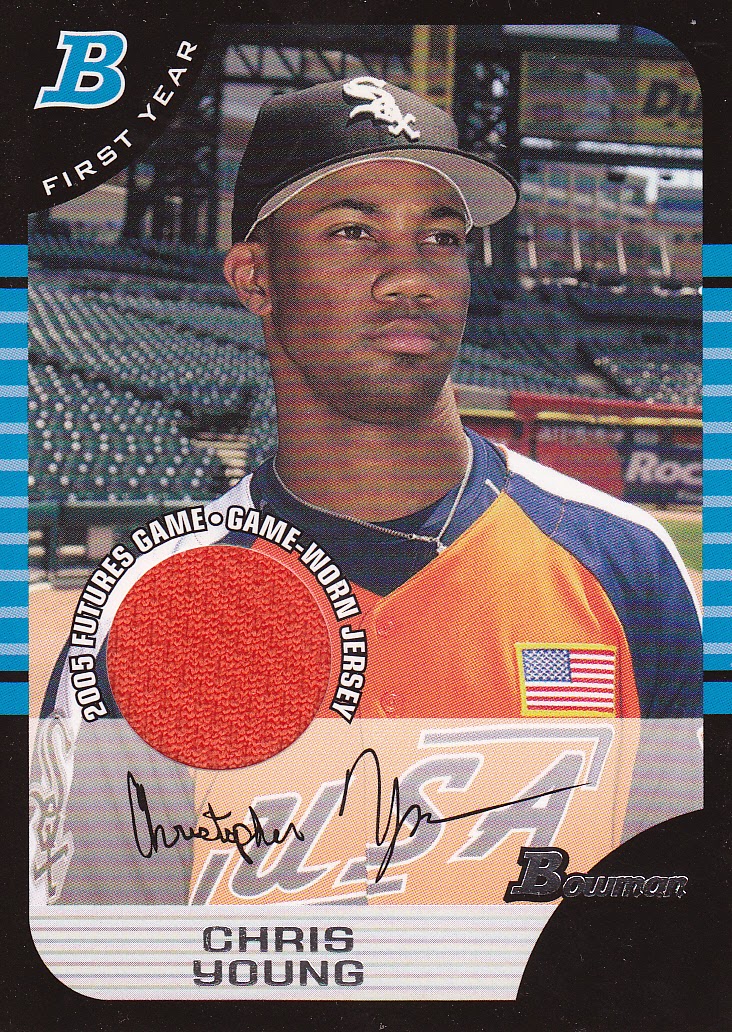 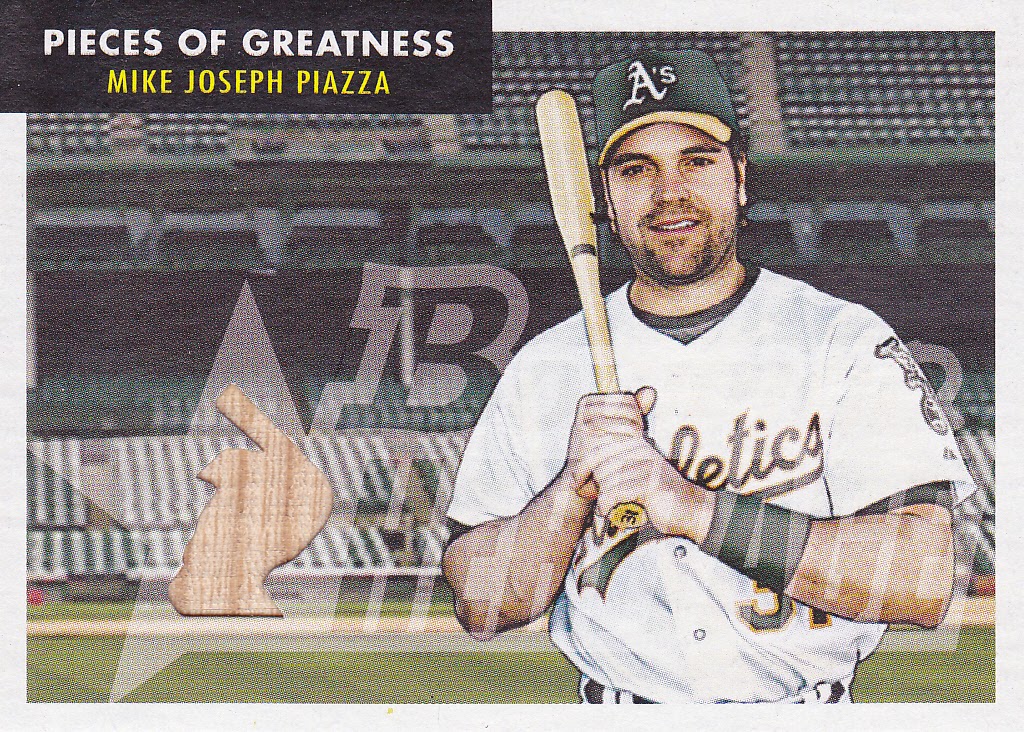 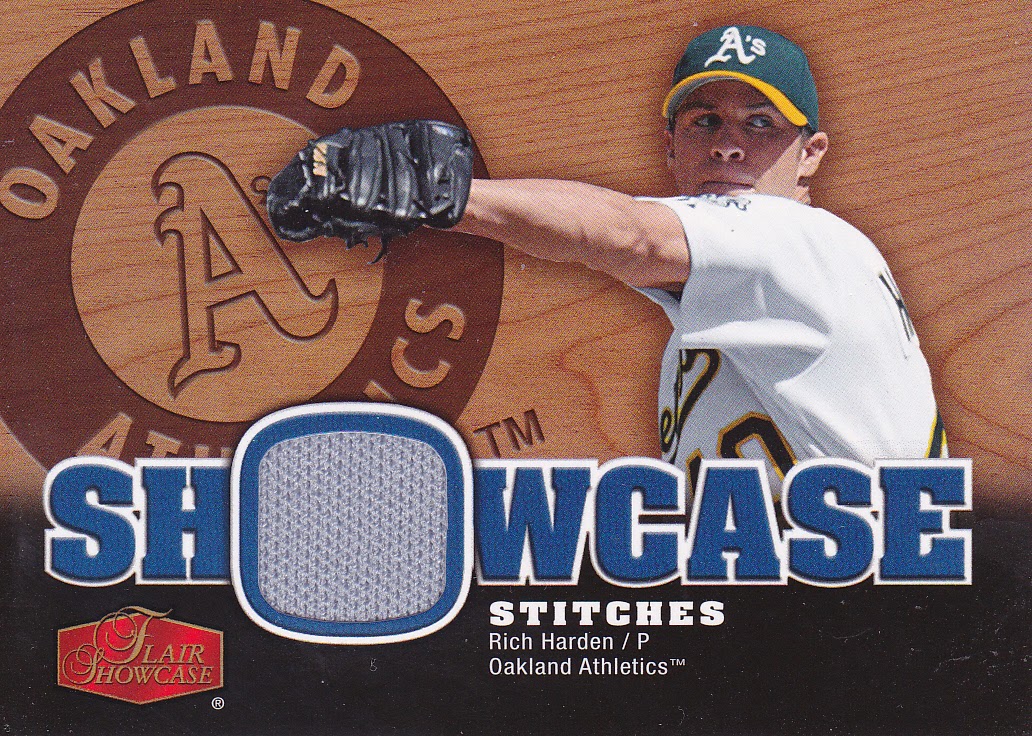 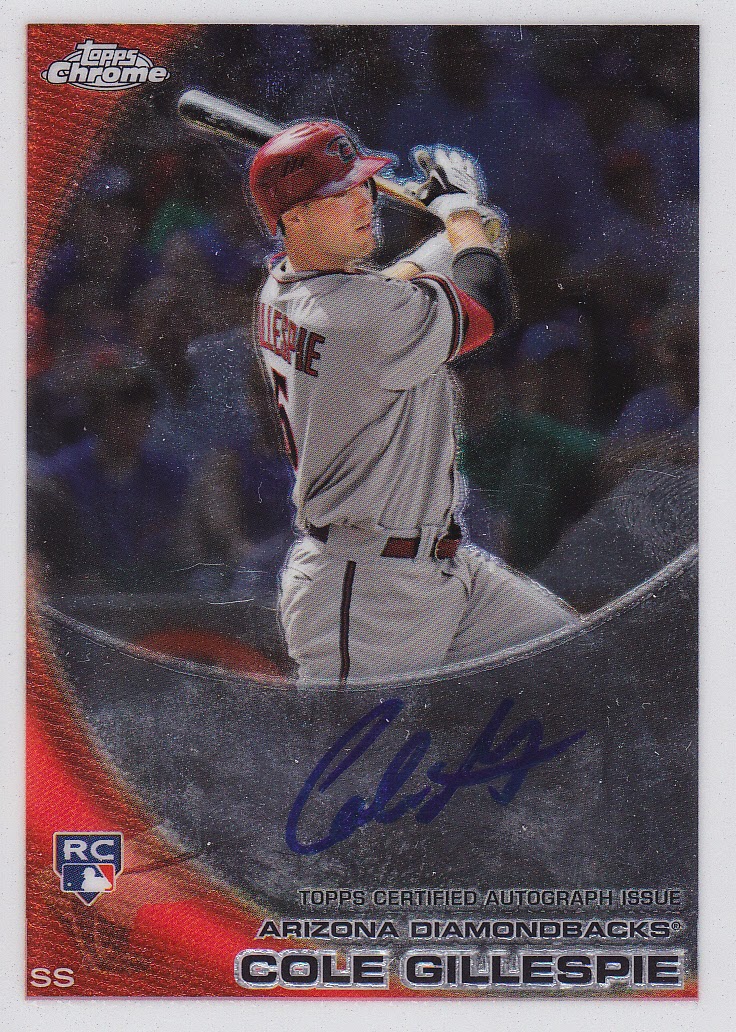 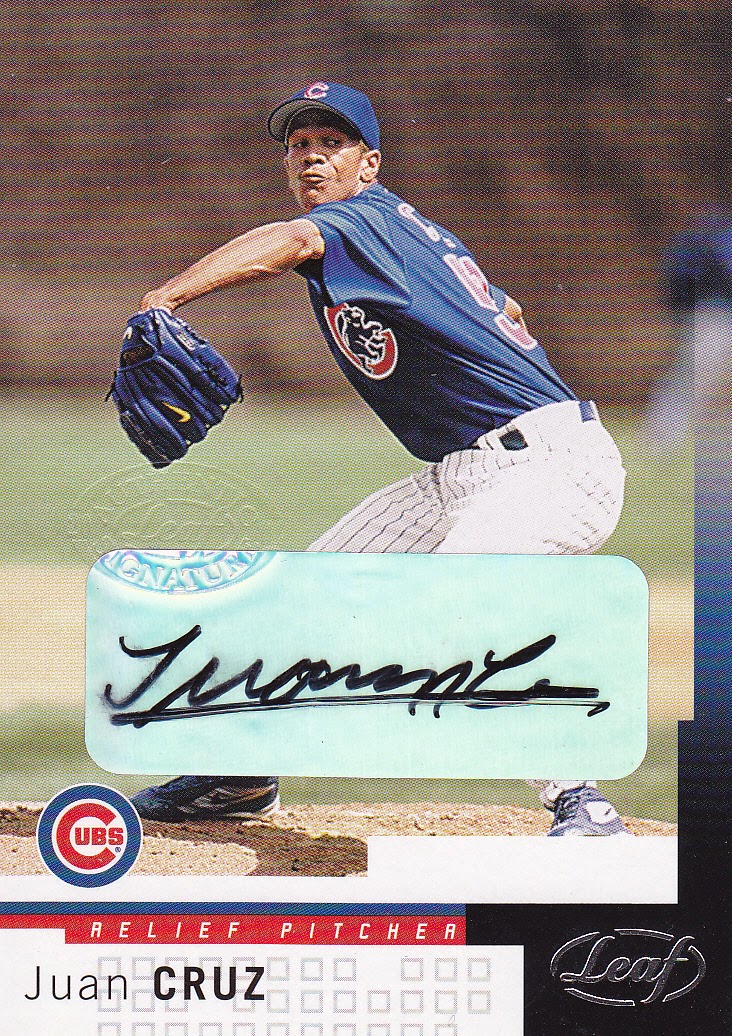 This one struck me as a little weird. The Leaf authentication stamp was applied after the sticker was put on the card...a regular base card. Typical Leaf half-assery.

Some pretty decent cards though that Fairfield used as guaranteed repack hits. My favorite is definitely the Piazza.
Posted by Need More Cardboard at 11:47 PM 3 comments: