Another recent box break for me was 2009 Upper Deck Signature Stars. A good chance to chase the Bryce Harper USA auto/relic. I didn't pull one. But I did get some decent cards. 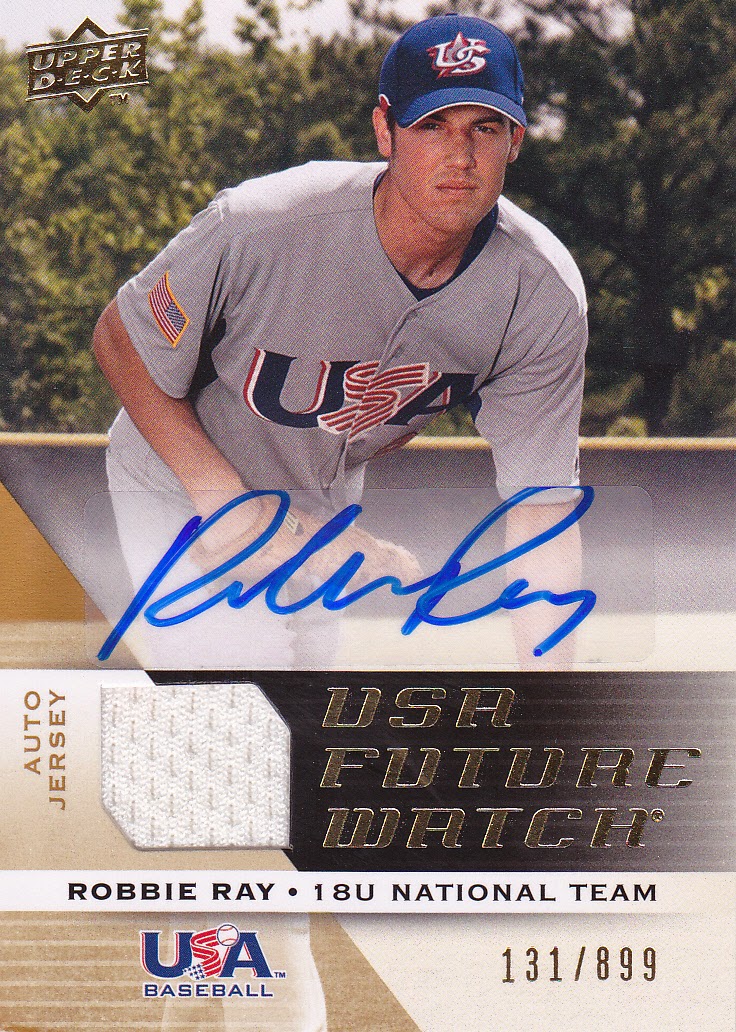 This ended up not being a bad pull. Ray made his Major League debut for the Detroit Tigers this year and his rookie card is in Update. While he did not pitch well in his first go-round in the majors, hopefully he can stick around and have a good career. 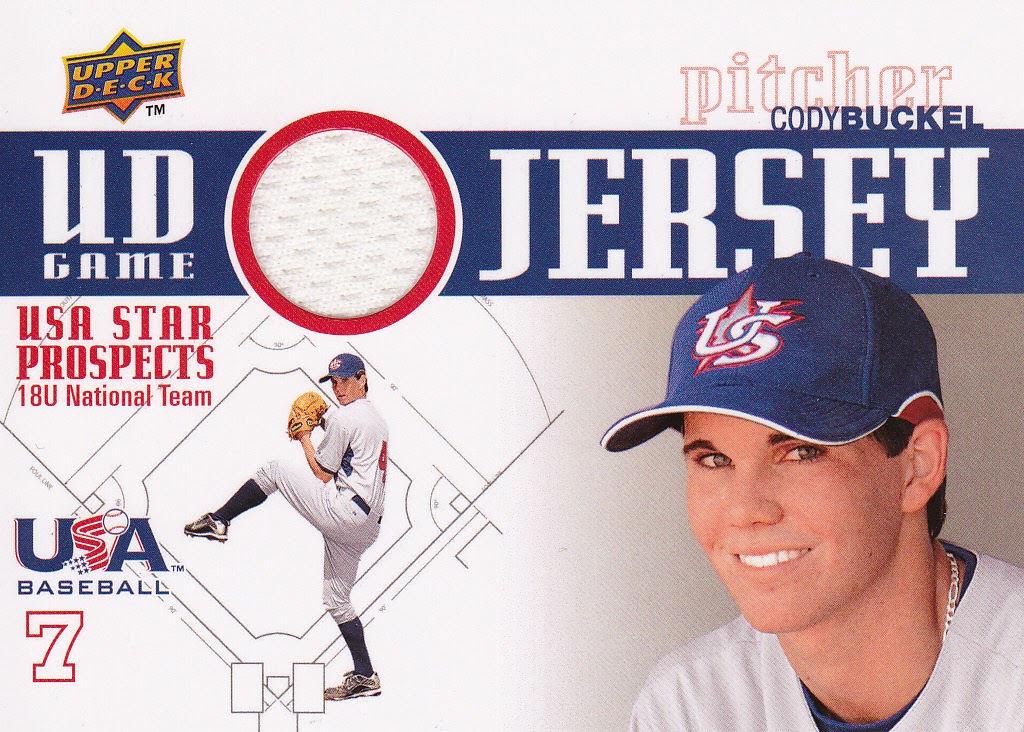 I actually saw Buckel pitch for the Hickory Crawdads (Rangers low-A affiliate) in 2011. He has good stuff. Buckel has boomeranged back and forth between rookie ball and AA. Looks like he's been most successful at both levels of Class A but hasn't found his groove in AA yet. At only 22 he has plenty of time to develop. It seems that as of recent his main issue has been injuries. In 2011 and 2012 when he was at his best his K/BB ratio has been very strong with a WHIP barely over 1.00. 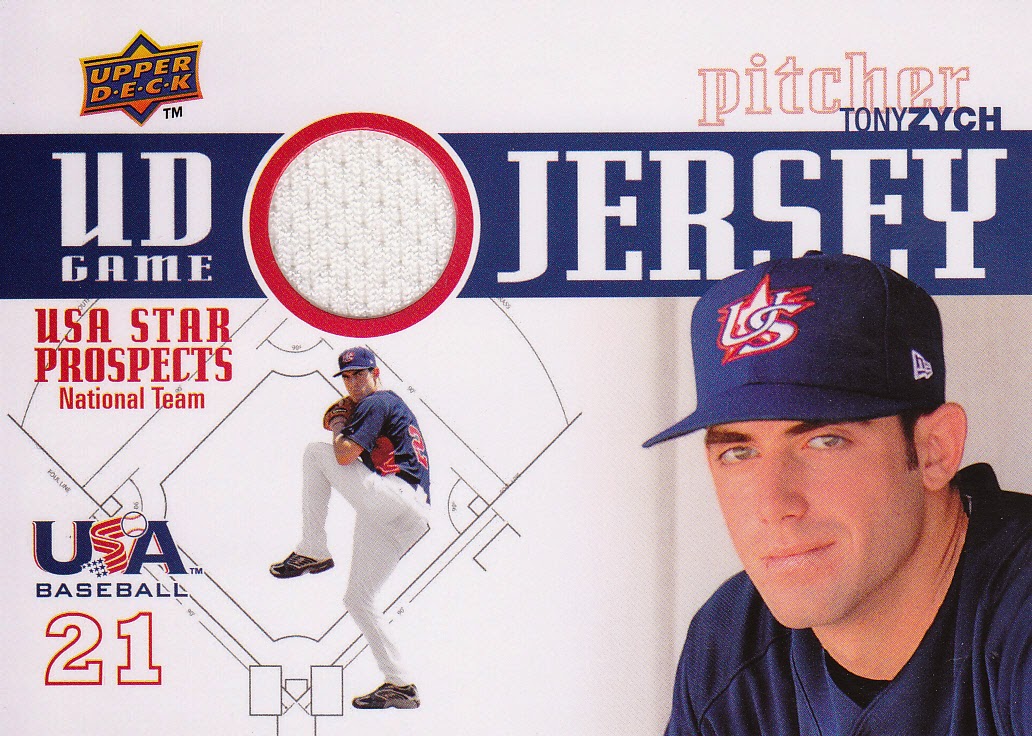 Zych pitches in the Cubs organization. While his story is similar to Buckel's he has managed to stick in AA since 2012. His stats aren't bad, nor are they outstanding. While I certainly wish him the best, Zych doesn't look like he has the stuff to make it to the show. 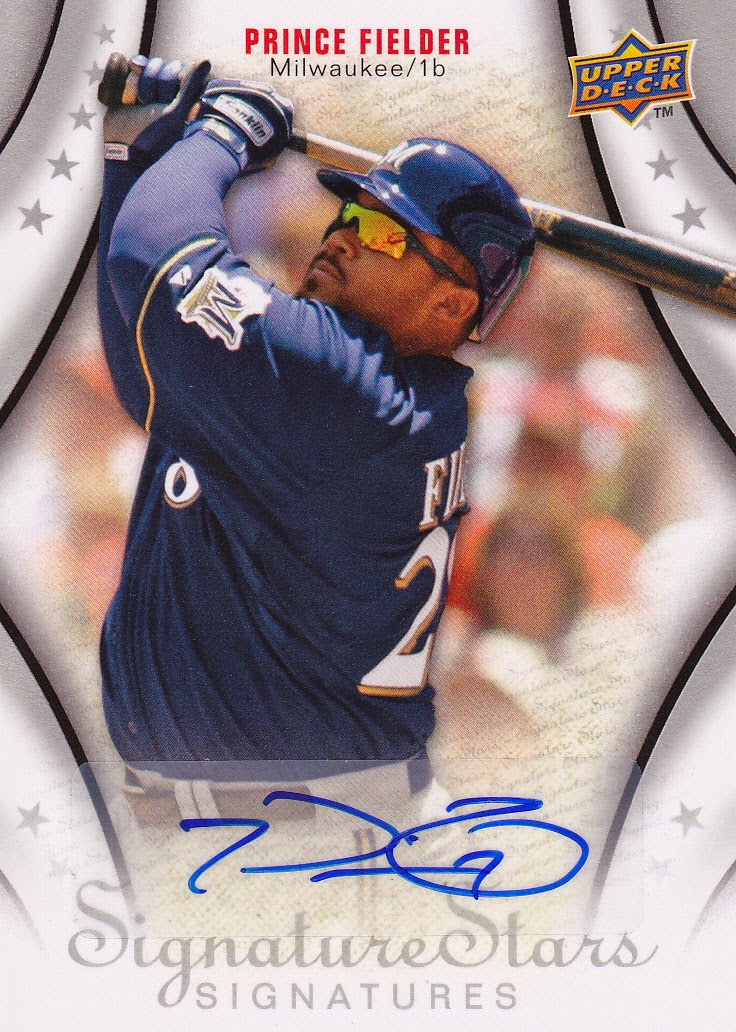 You know about this guy already.

This was a fun box to bust. I didn't pull anything huge, though the Prince auto is certainly nice. But for the price and with the possibility of some really big pulls it's not a bad product.

Edit: Just saw that this is my 200th blog post!! Maybe I should do a contest soon to celebrate..
Posted by Need More Cardboard at 11:48 PM 1 comment:

Another recent box bust I did was 2008 Upper Deck SP Authentic. The price was good from Blowout so I added it to my order. The base cards and inserts were mildly interesting but provided nothing of note. The box promised three autographs including a By The Letter patch/auto. 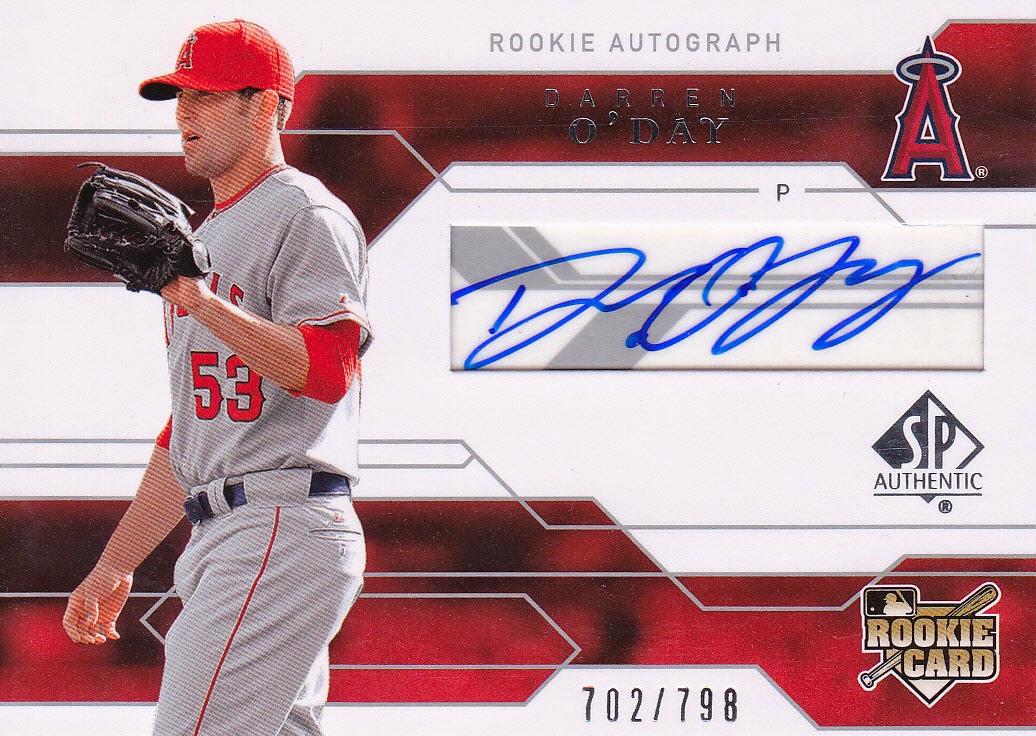 While these autos are on stickers I really like the thick card design with the sticker embedded under the top layer in a window, like a relic. It gives the card a more substantial high-end feel. At least it does to me. 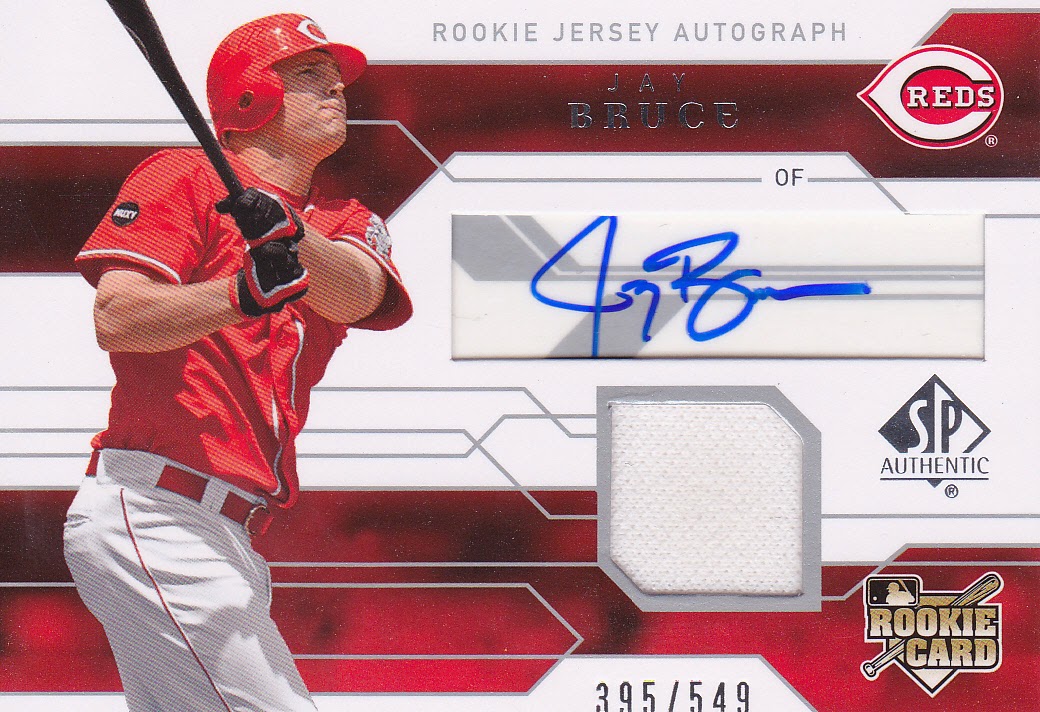 I was definitely happy to pull this card. While Bruce's numbers tapered off some in 2014, he's really seemed to be coming into his prime the last few seasons. Hopefully he will return to form next year. Also the card was not really cut off, just my scanner not doing it's job well.

And lastly, the much anticipated By the Letter patch auto! 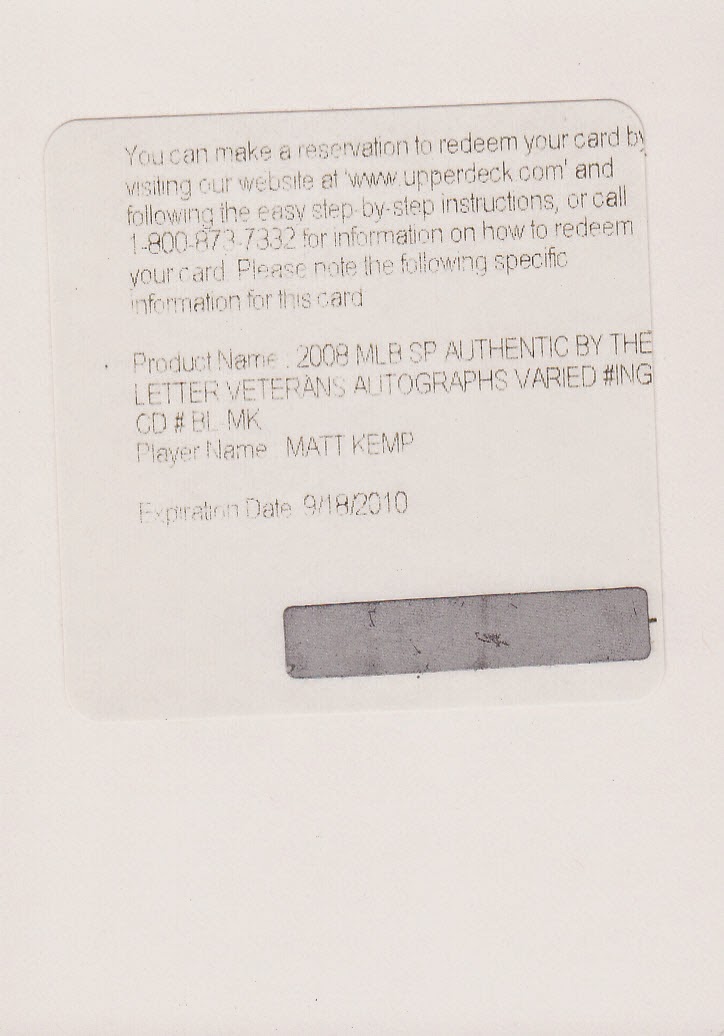 Oh for ####'s sake. And what's worse, this redemption card was on a patch card thick sized decoy. Un####inbelievable. Yes, I know I was taking that risk when I bought a six year old box but that doesn't change the fact that pulling a redemption that expired four years ago for what should have been the best card in the box pisses me off. Ugh.
Posted by Need More Cardboard at 11:22 PM 2 comments:

As the title says I recently busted a couple boxes of Topps Chrome. Overall I feel like the boxes were probably about average so I think I did ok. Here are the autos and color. 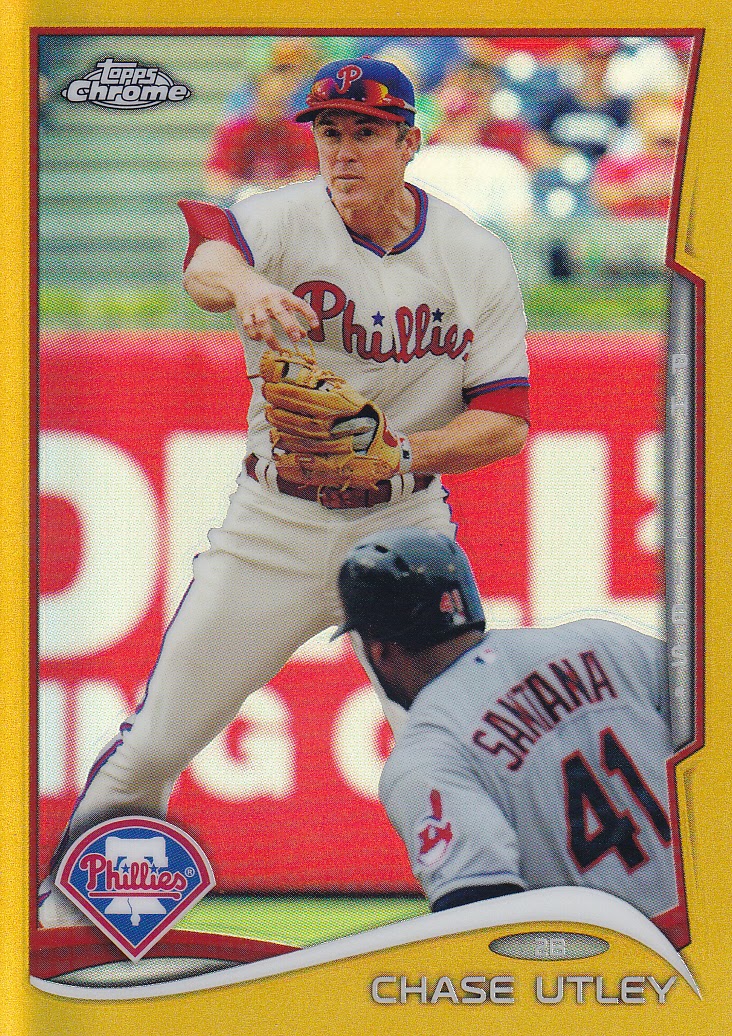 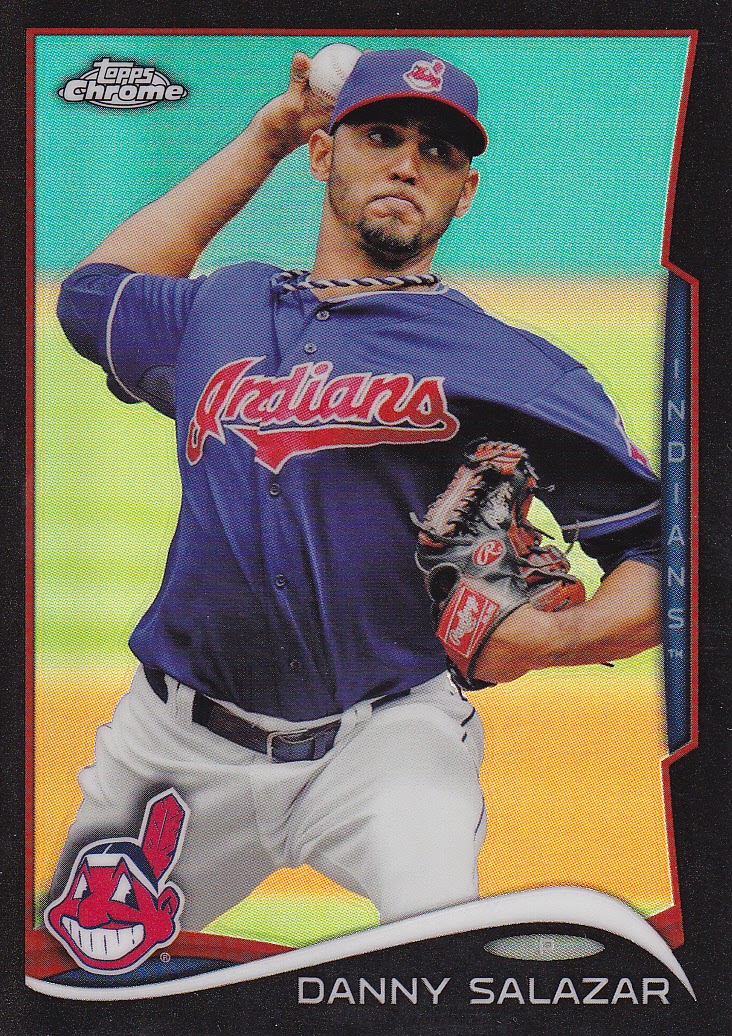 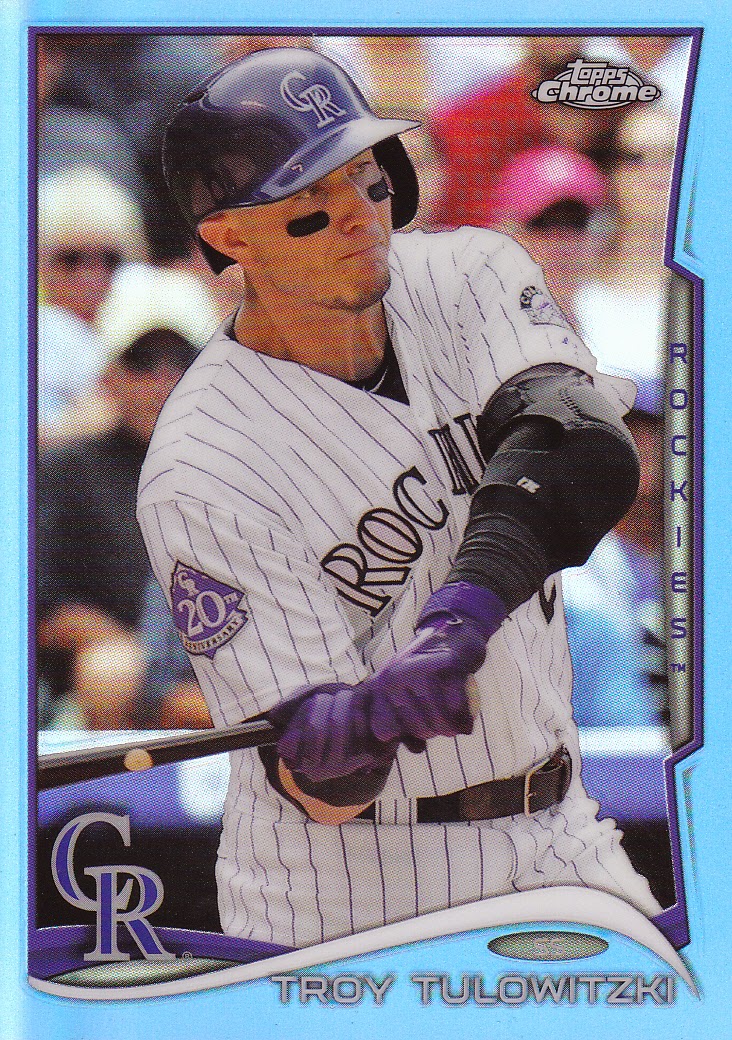 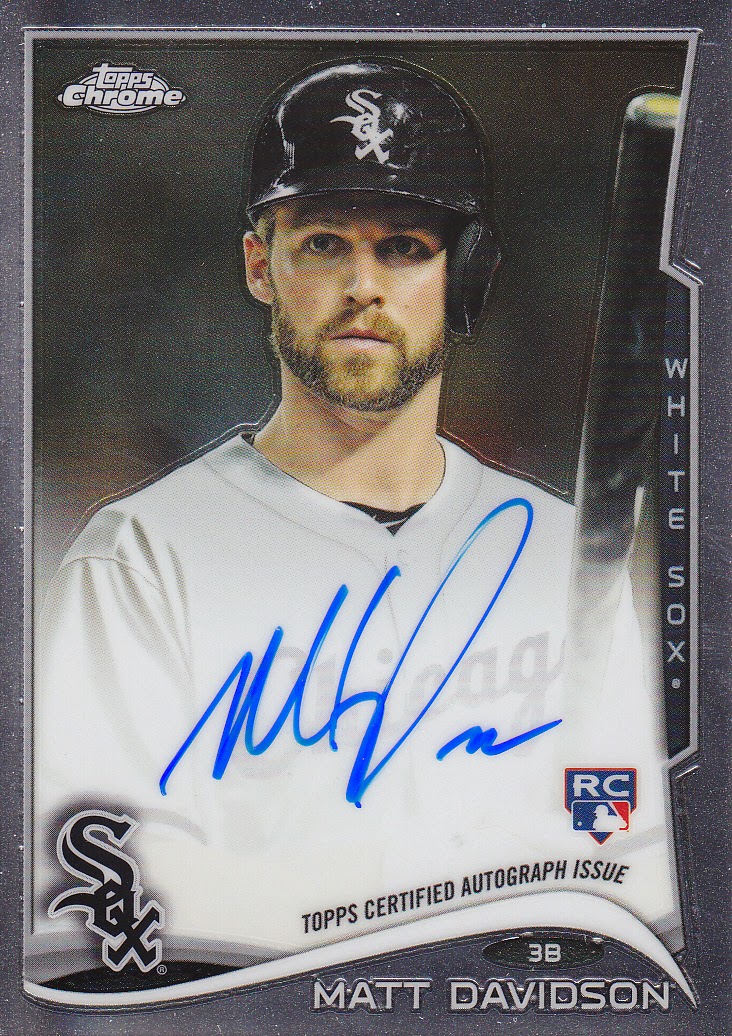 Davidson's stats in AAA left much to be desired in 2014 which lead to him never being called up to the Sox. But he's still young and has time to develop. 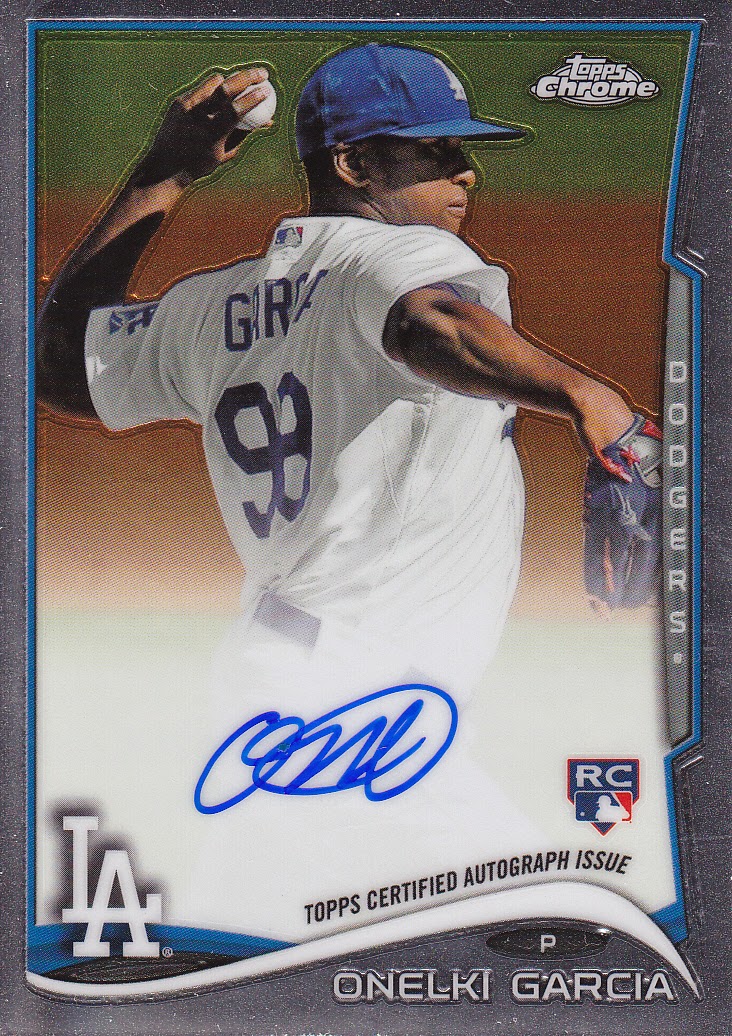 From what I can tell Garcia did not pitch in 2014 beyond an inning or two, I assume due to an injury. 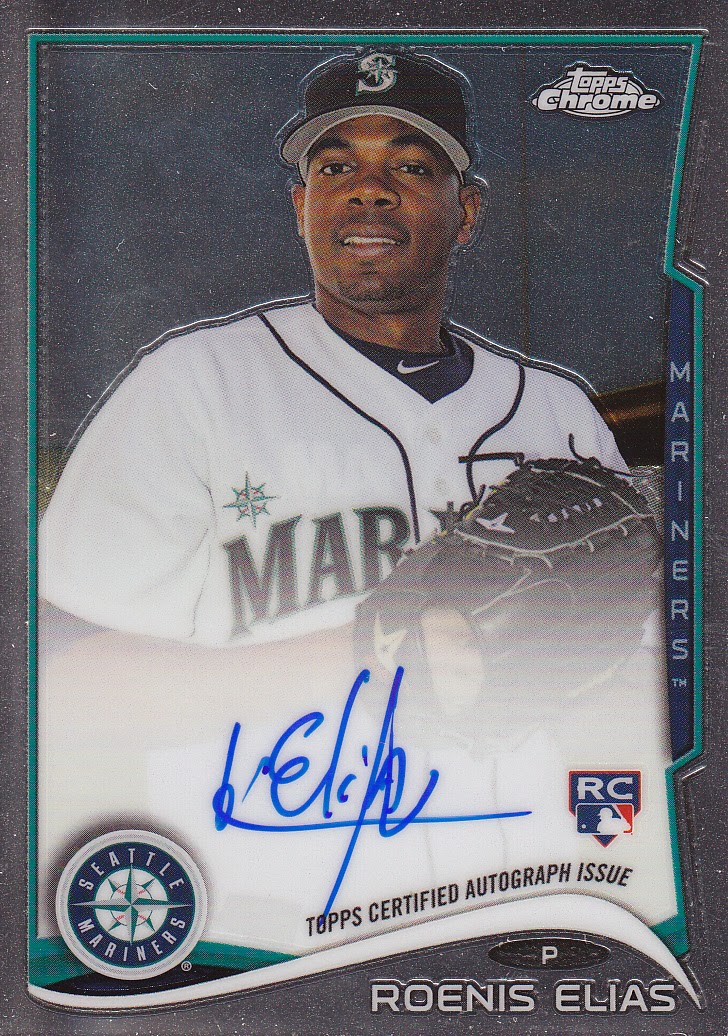 Elias had a strong rookie campaign for the Mariners this season going 10-12 with a 3.85 ERA in 29 starts. As a bonus he was just named to the Topps All-Rookie team meaning that his 2015 cards will feature the "Rookie Cup" logo. His future looks bright so I was happy to pull his auto. 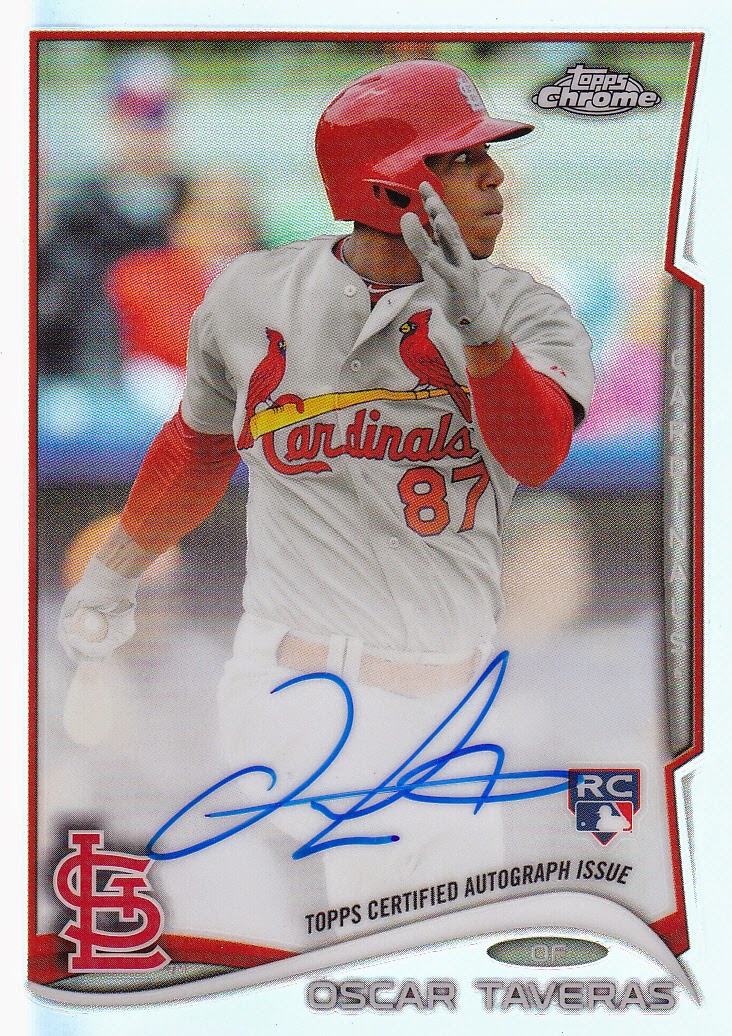 I pulled this card just two days before the tragic car accident that took the lives of Oscar and his girlfriend. So many people have commented on his death that it's sad because he had so much promise and potential as a baseball player. I think that is incredibly selfish as a baseball fan to say that. Who cares about baseball. It's sad that a young man and young woman lost their lives because of a stupid decision and that a one year old boy will grow up never knowing his father. Ladies and gentlemen, please be responsible when consuming alcohol and NEVER drive after doing so.
Posted by Need More Cardboard at 11:29 PM 4 comments:

Awhile back I mentioned in a post about how my dad went to high school with former pitching phenom Don Gullett. Gullett was drafted out of high school by the Reds, made the majors at 19 and later pitched for the Yankees before having his career ended by injuries. During his short nine year career he had a very strong 109-50 record with a 3.11 ERA finishing with double digit wins in six of his nine seasons. Gullett is also one of the very few players to win the World Series four years in a row.

Well one evening recently I stumbled across an eBay seller that had some vintage 70's cards for $1 each. They included the following, which I bought. 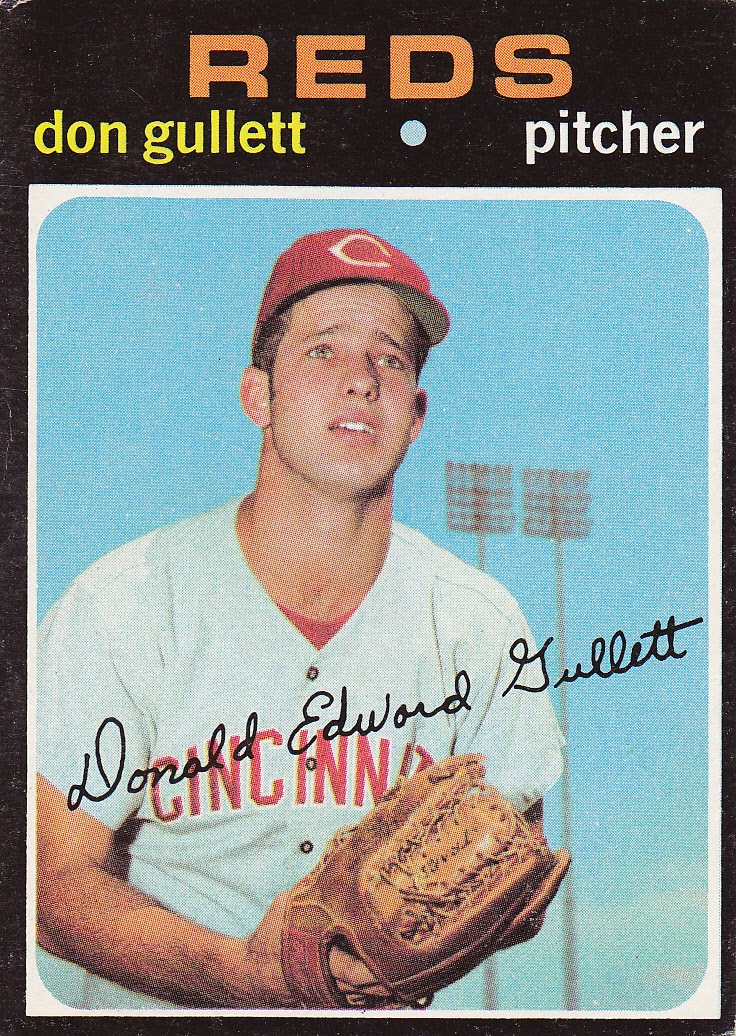 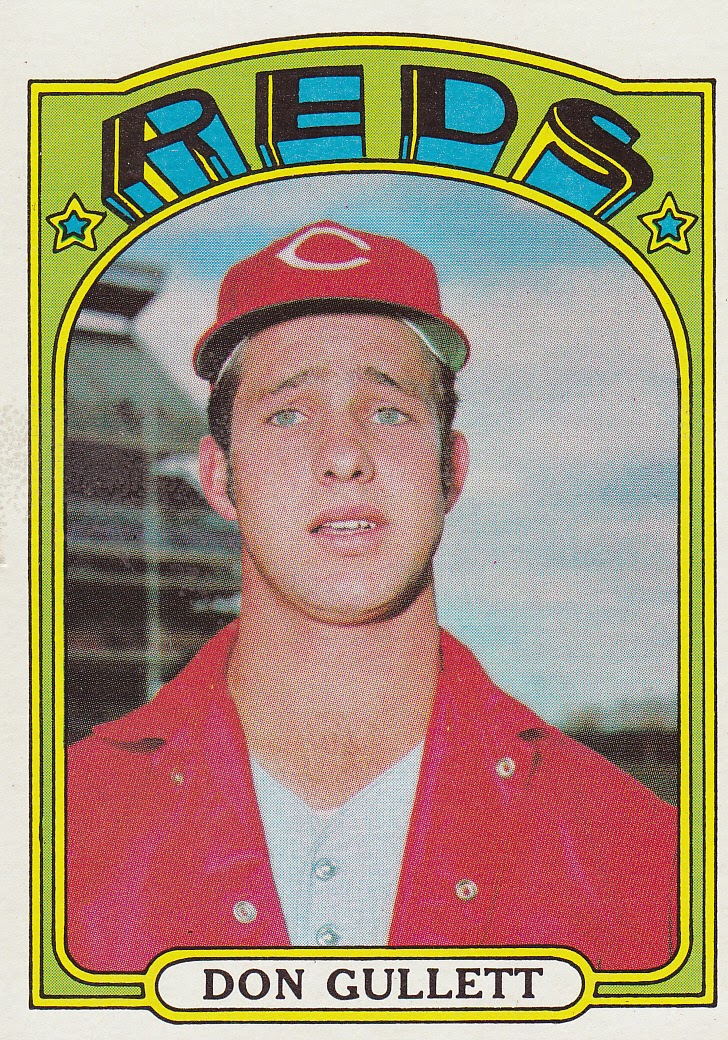 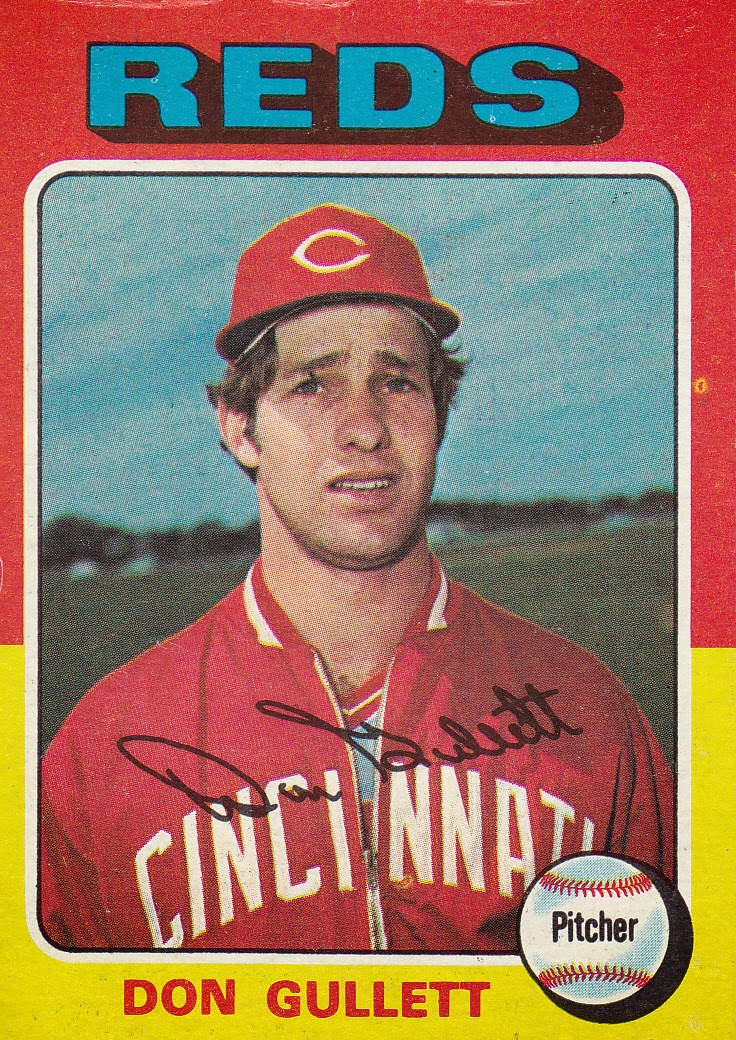 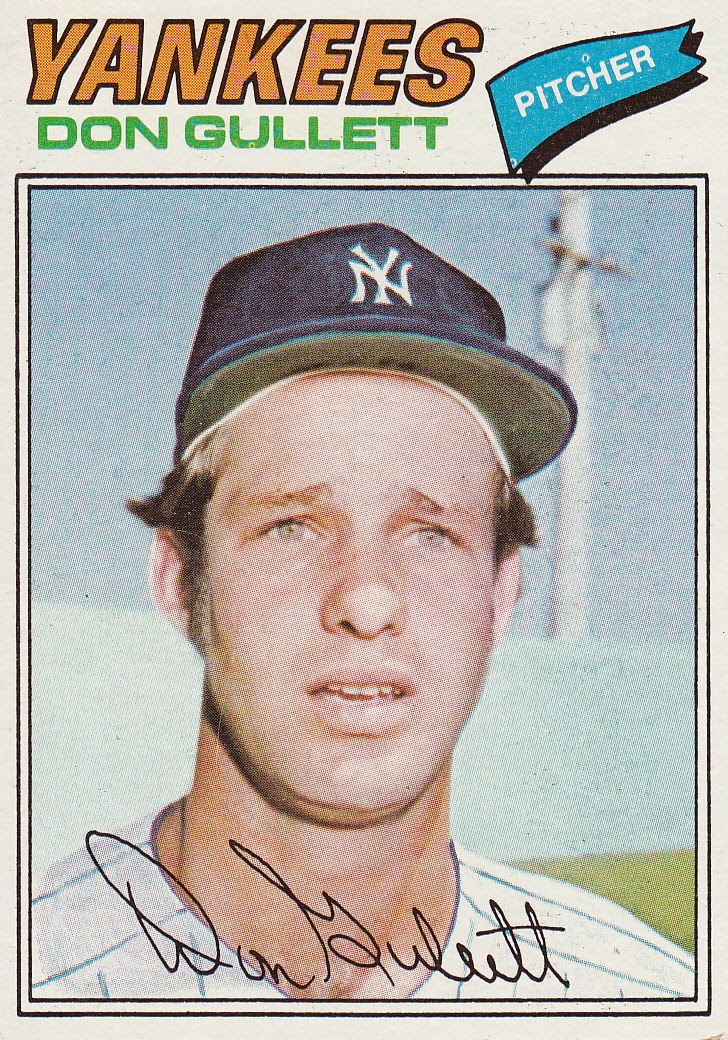 On a side note, I showed these cards to my dad and he said he always though Don looked like he was lost staring off in the distance, ie, all of the cards above save for 1978.
Posted by Need More Cardboard at 10:53 PM 4 comments: 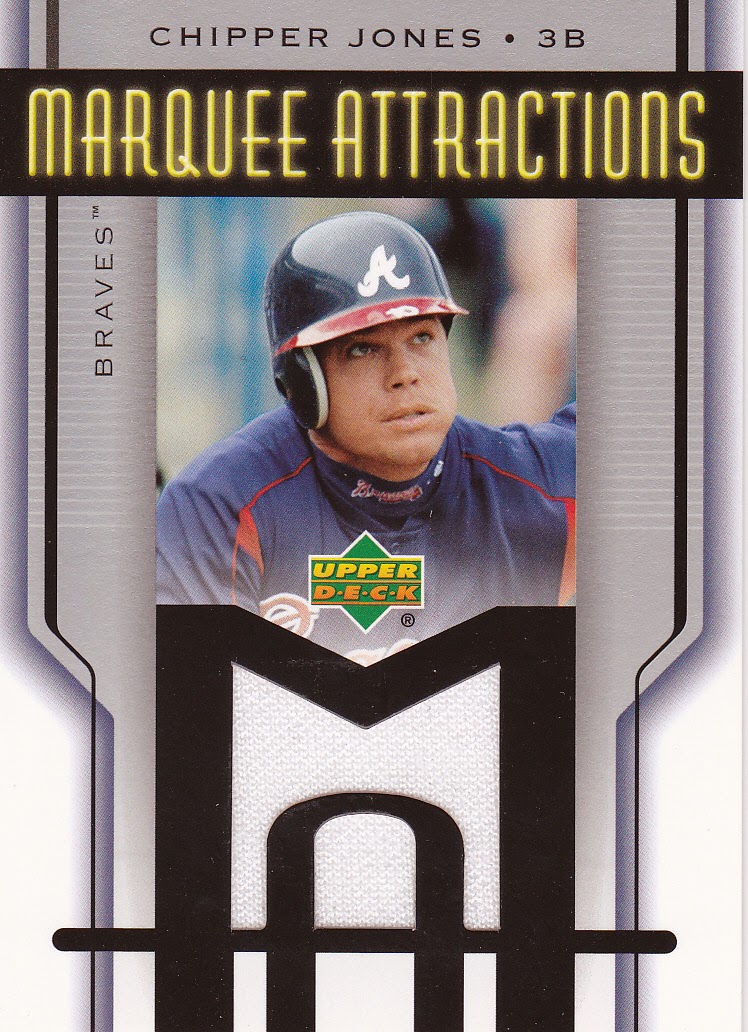 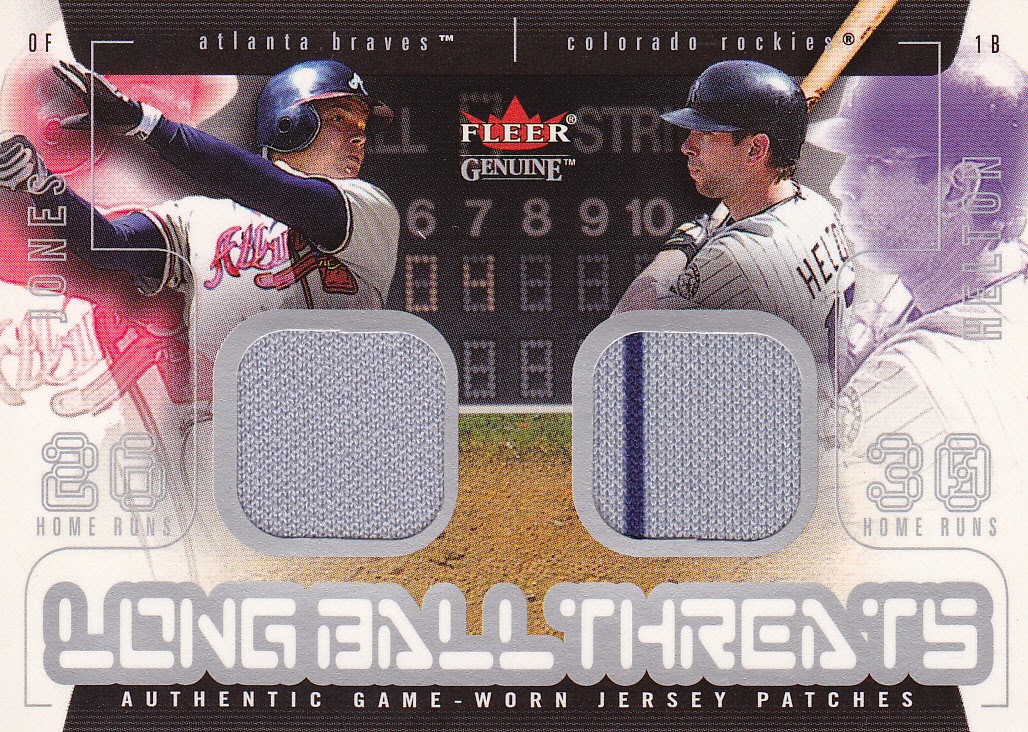 The next two cards came as a lot. I was more interested in the auto RC of the Braves future franchise catcher since I already acquired a similar relic. But I'm not complaining! Especially for the $6 shipped price. 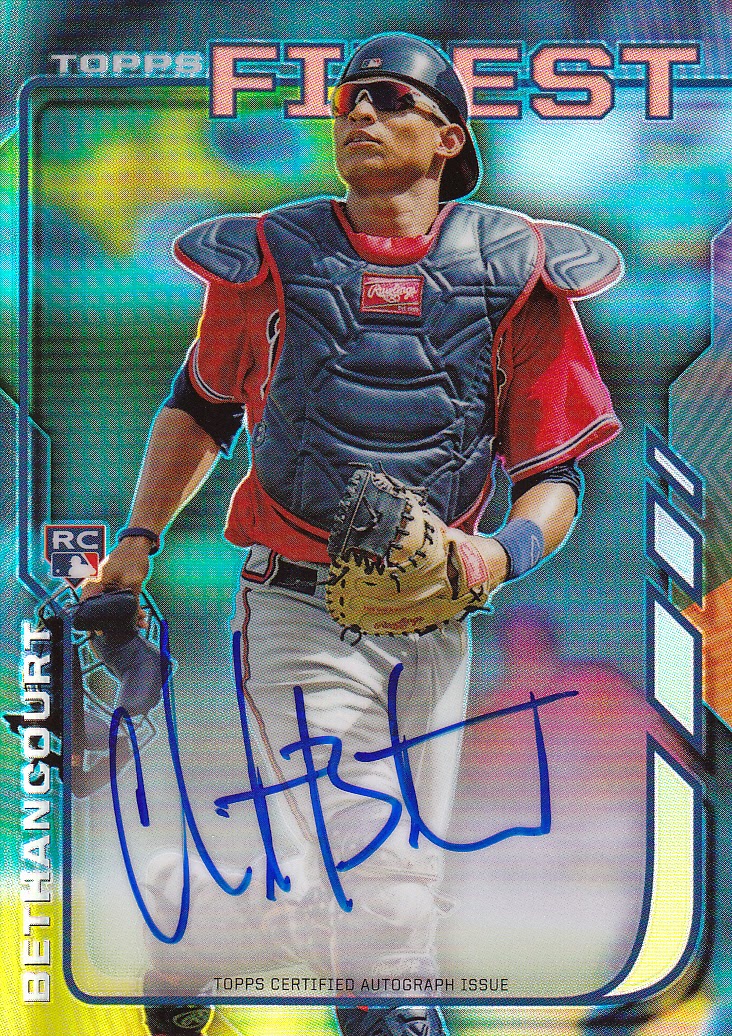 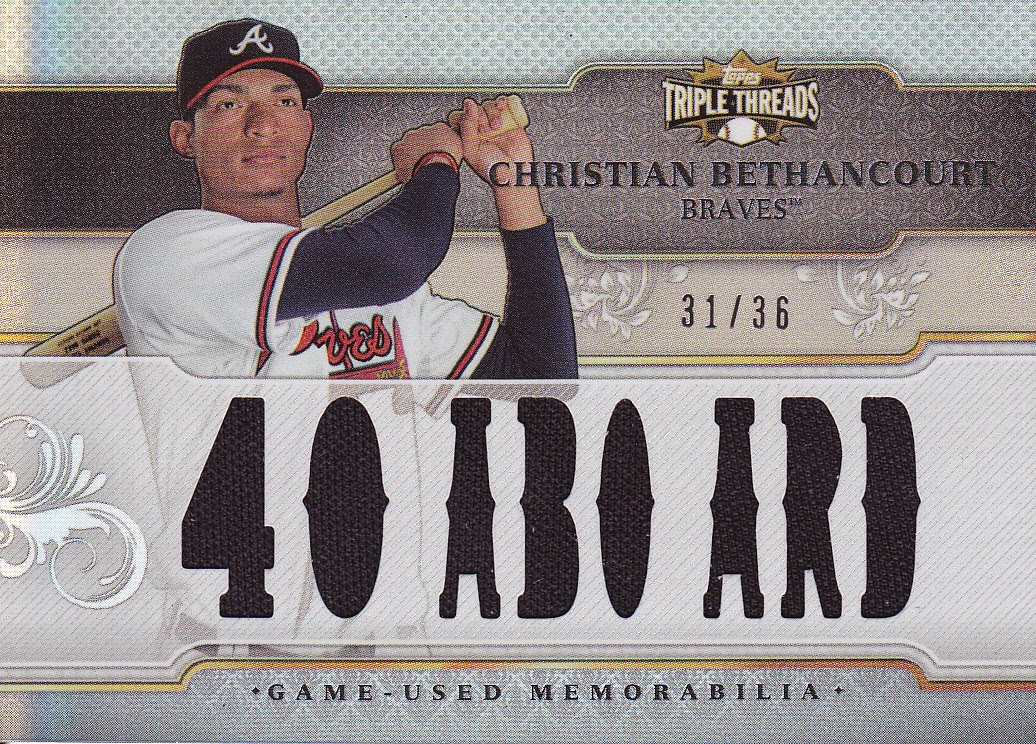 When retail is better than hobby

Over the last couple weeks I've purchased five hanger boxes of 2014 Topps Update because there's been nothing else even slightly interesting. From these five boxes I have accumulated what I'm guessing is close to a complete set as well as plenty of inserts, Walmart blue parallels, five gold parallels and the following cards. 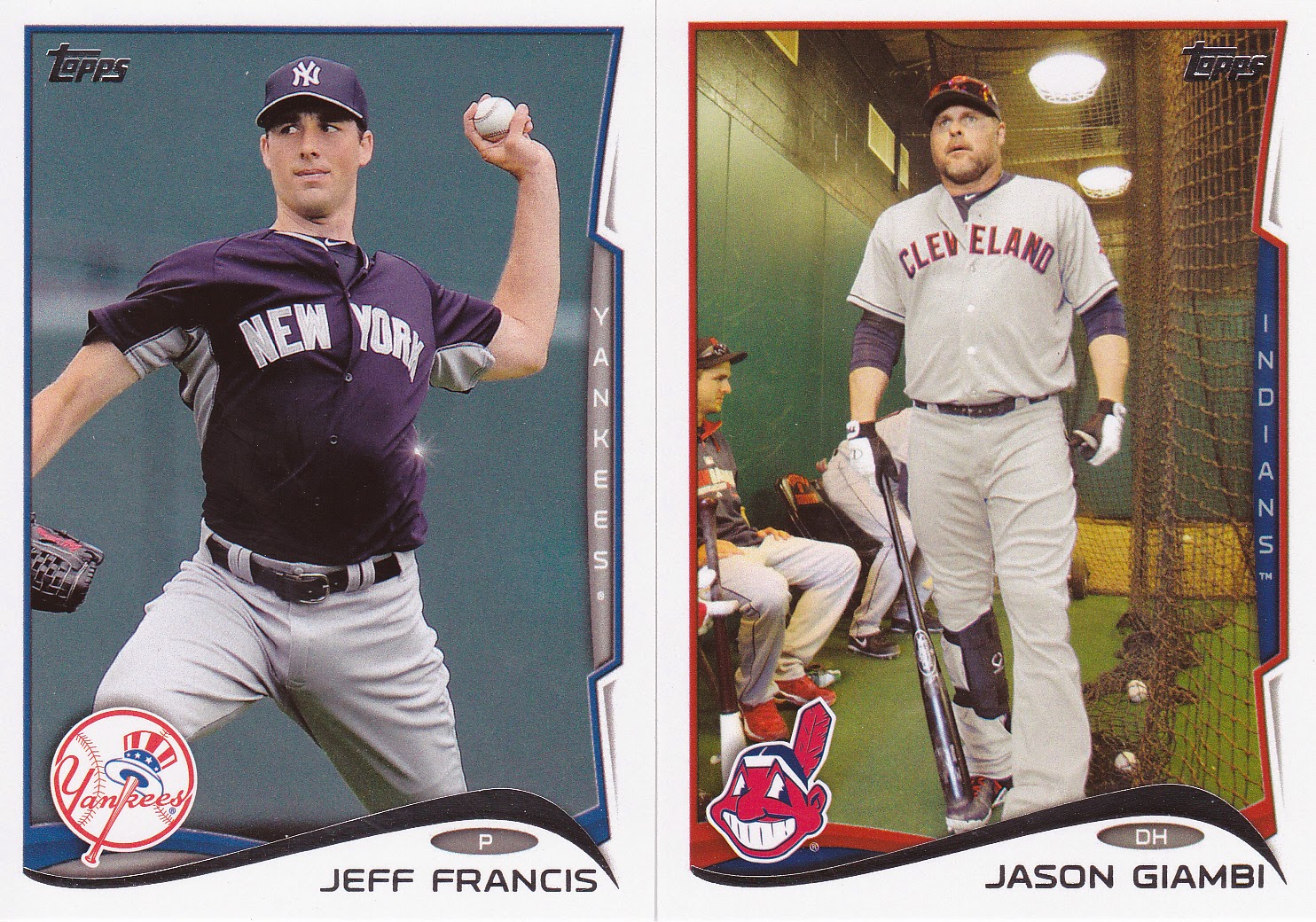 A sparkle variation and an image variation. Topps really went nuts with the variations in Update series. Way over the top. I mean..really, come on Topps. A pitcher who hasn't had a good season since 2007 and a guy whose prime ended when I was in high school and who hasn't played more than half a season since 2008. I guess maybe this is better than forty-seven different parallels ala Bowman Chrome. 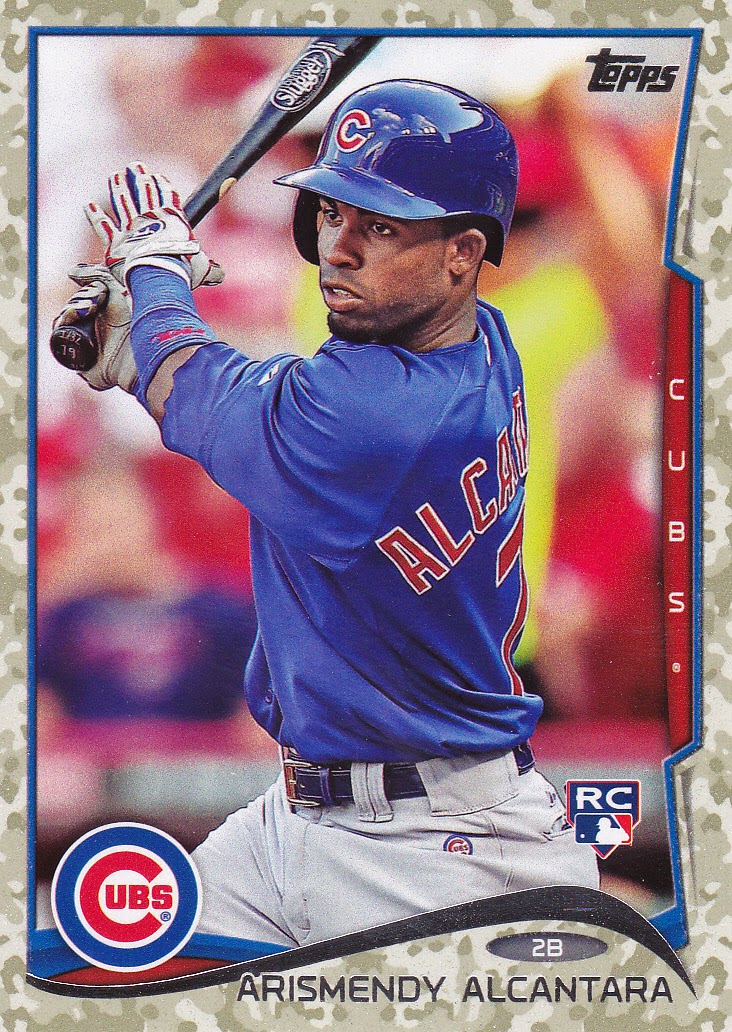 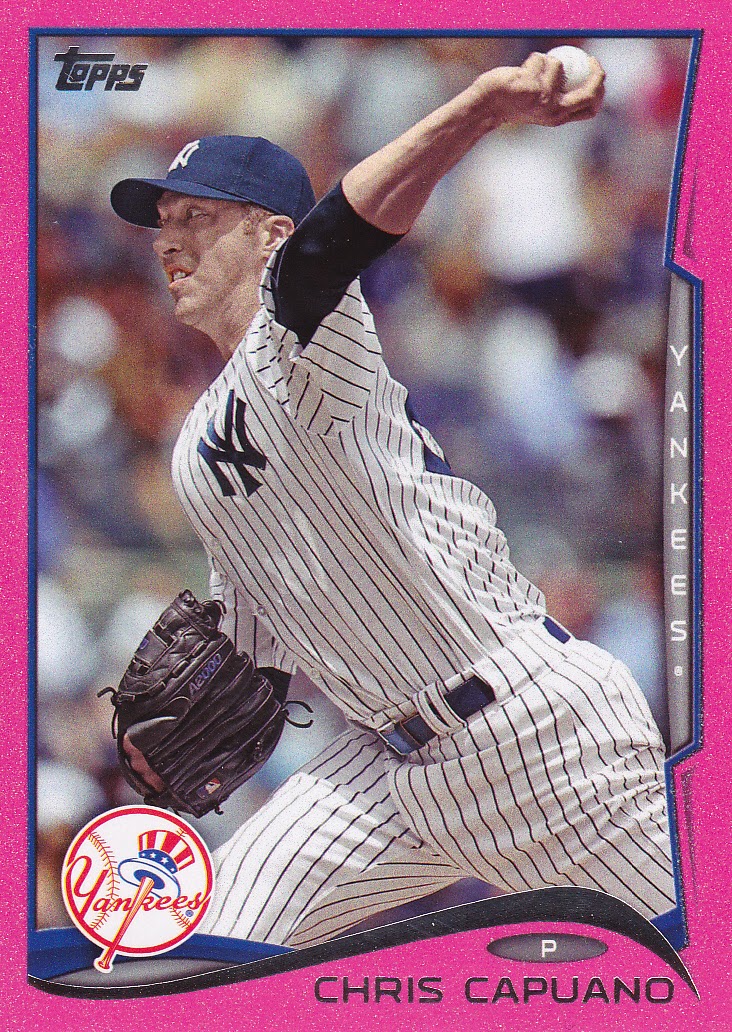 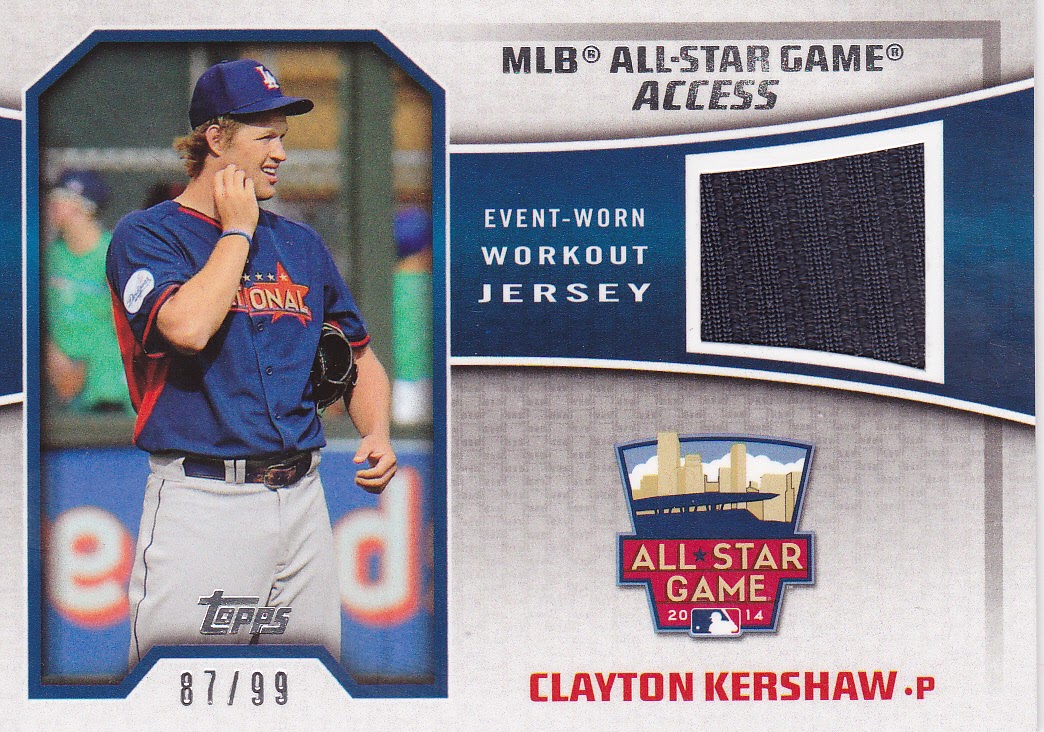 So let's analyze this. For about $50 plus tax I got a near full set, two variations, two color parallels numbered under 100 and a numbered relic of the newly crowned National League Cy Young and MVP award winner. Hobby boxes have just this week dropped below $50 online and I would imagine are still in the $60-70 range at your typical overpriced LCS (like mine). Actually knowing my LCS they're probably still $85 there like they were on release day and will stay at $85 until they turn to dust. But I feel like the chances of pulling these cards from one hobby box are near zero. Most boxes would likely yield one sub-100 color parallel, an unnumbered All-Star stitches relic and MAYBE one variation if you're lucky.

So I think I'm starting to figure out that during the period of peak to mid-range prices for current year Topps flagship buying retail is a better bet than buying hobby. Ignoring the existence of jumbo boxes of course. While I think hobby is far superior to retail in other Topps sets like Ginter, Topps Chrome and Bowman Platinum, in this case it looks to me like retail wins.

Well America's Largest Employer put out a couple rack packs that they had somehow missed I guess. I bought one because Bowman was a fun rip this year. And what would I pull...but...this: 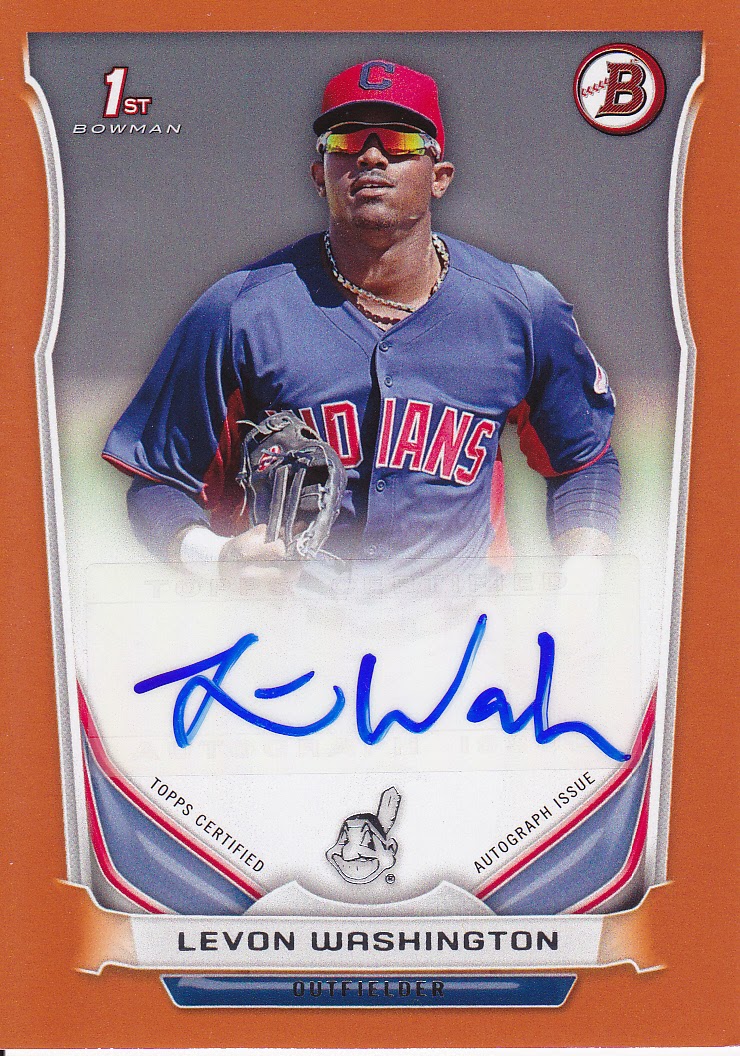 Now these were seeded 1:255 packs. I did not open even half that many packs of Bowman this year between retail and hobby, much less retail alone. So the chances that I would pull two orange autos was not good, much less the same freakin guy from a checklist of 22 players. I'm no math whiz but I expect that the odds were astronomical. Maybe I should start buying lottery tickets...
Posted by Need More Cardboard at 1:00 AM No comments:

I actually got these cards about a month ago but I'm super behind on scanning an posting. 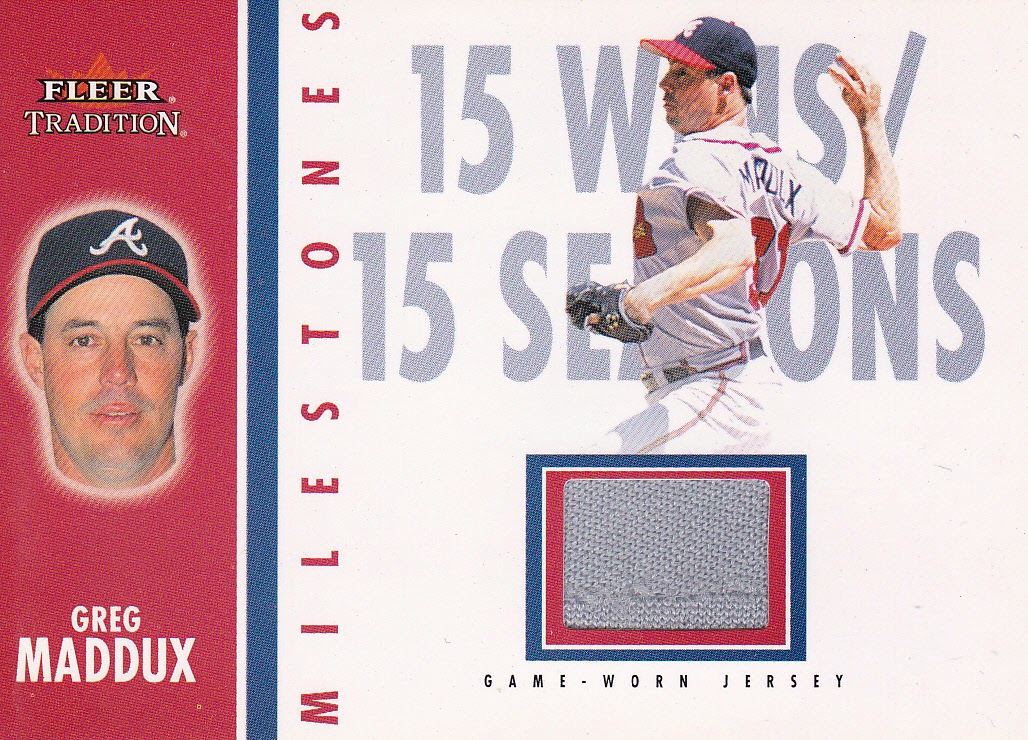 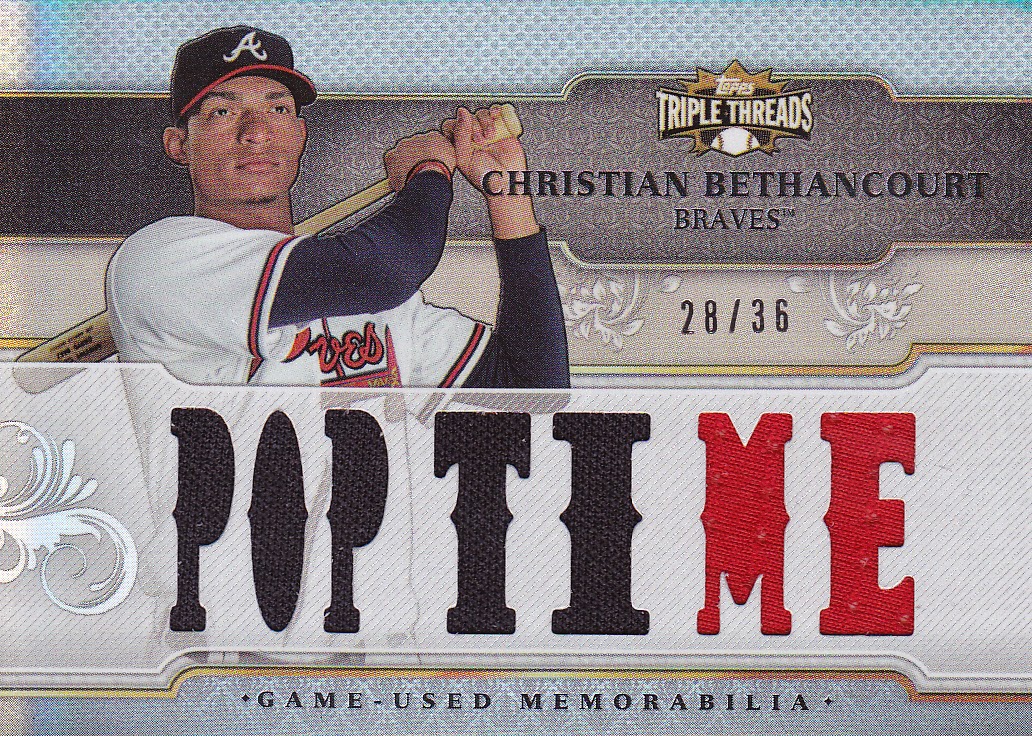 And my first relic of the Braves future star catcher 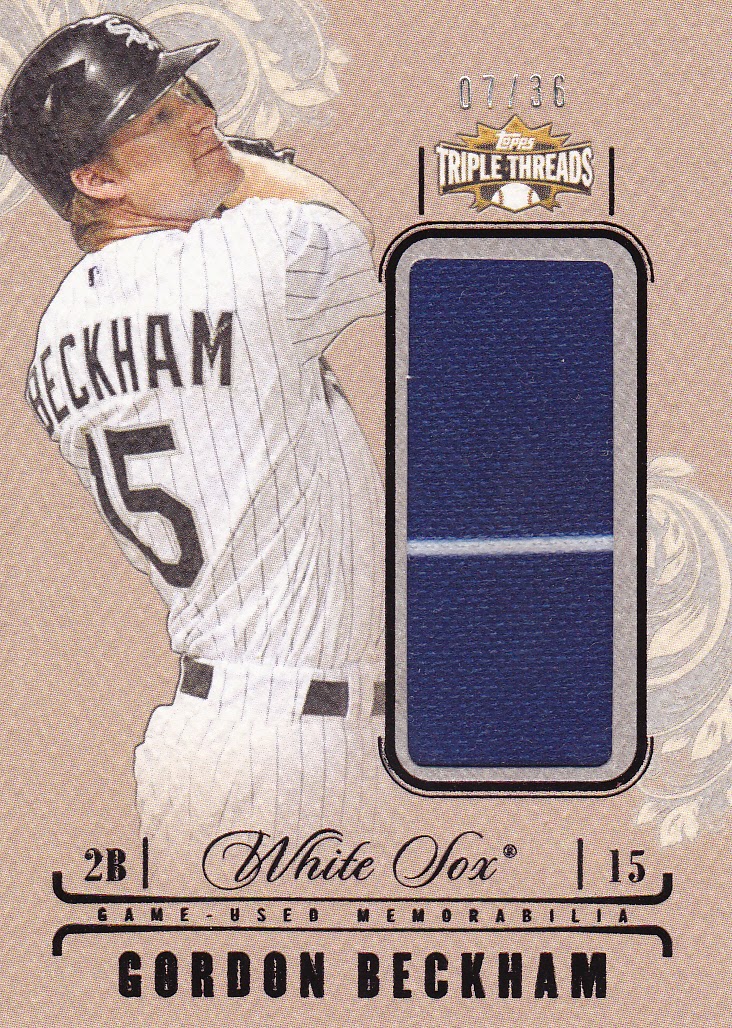 I picked this one up simply because the swatch is awesome. It obviously comes from the White Sox navy with white pinstripes alternate throwback jersey. I love non-white/gray jerseys. So when I can get a relic of one I love it.
Posted by Need More Cardboard at 11:03 PM 2 comments: