eBay autos plus a plate

Here are a few autos I recently picked up from eBay as well as a printing plate. 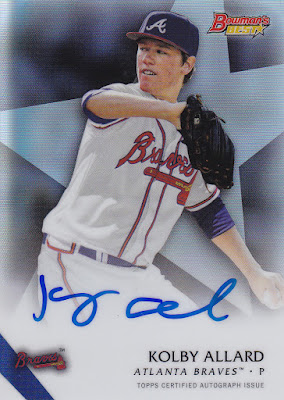 Kolby Allard was picked 14th overall by the Braves in the 2015 draft. He started this season in Rookie ball and has since been moved up to Low class A. Overall his numbers have been pretty good. At only 18 years old it's going to be a few years before he could possibly make it to the show. 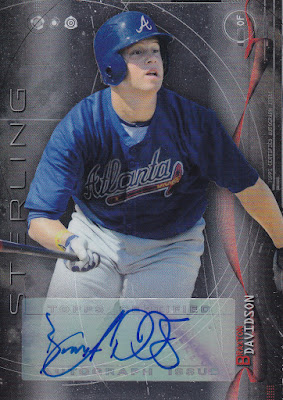 Next is Braves outfield prospect Braxton Davidson who they took 32nd overall in 2014. He's currently at the high class A level and has had some struggles at the plate but has shown some potential for power. 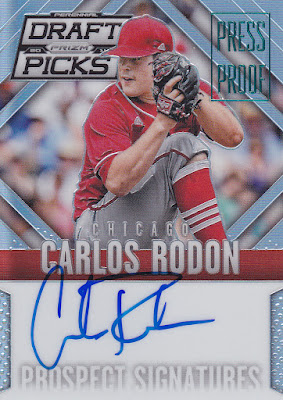 Carlos Rodon is a known commodity. He had a strong rookie years with the White Sox in 2015. This year has been a step back. But he is still young and has a high ceiling. 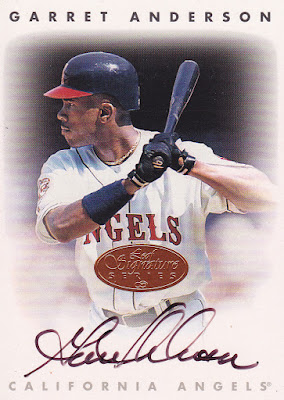 I always enjoyed watching Garret Anderson play when I was a kid. He was always one of those players that hit for a good average and was a steady contributor despite not being a perennial All-Star. 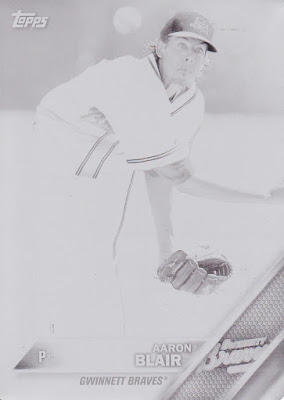 Lastly I picked up this black printing plate from 2016 Topps Pro Debut of Aaron Blair. The Braves got Blair as part of the Shelby Miller trade with the Diamondbacks. He made his MLB debut earlier this season but has not pitched well. I am hopeful though that as he gets older and gains more experience he will become an important part of the Braves rotation.
Posted by Need More Cardboard at 9:35 PM No comments:

Group Breaks and Cards for Trade

Howdy folks. It's been awhile. About six weeks actually. It's been a busy summer for me between work and vacation. In July I visited Washington, DC and Philadelphia catching a game in each city. I went to the game between the Nationals and Pirates that went 18 innings. The game ended up 2-1, and not because of good pitching. The hitting was pretty horrible. I attribute it mostly to the heat. It was HOT. But we stayed for the whole thing. I hope I never see another 18 inning game. That next Wednesday I went to a game between the Phillies and Marlins. It ended with a 4-1 Phillies victory that went by pleasantly fast. It also had the interesting distinction of zero walks being drawn by either team. I also got to see Ichiro take an at-bat, a pinch hit flyout. I'm glad I got to see him hit before he retires.

Through all this time off from blogging I haven't stopped adding to my collection. Recently I joined my first few group breaks. The first I joined was Crackin' Wax's 2016 Topps Archives break. I would have preferred to have the Braves but they were taken, so I took the Orioles slot. I wasn't expecting to get anything of consequence but ended up getting this nice BJ Surhoff Fan Favorites auto. 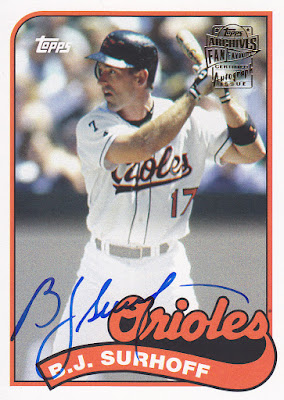 I next joined a multi box break over at Nachos Grande. He was breaking a box each of 2016 Donruss, 2016 Diamond Kings, 2016 Topps Finest and 2016 Topps Legacies. He also threw in some assorted packs for good measure. I took the Braves in this break and ended up with the Pirates as my random team. I like the Pirates so that worked out well for me. 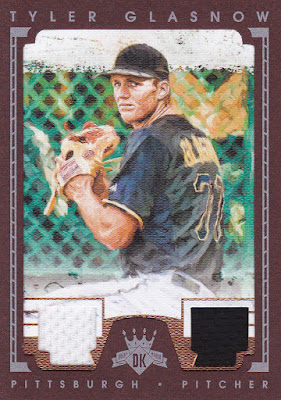 The Pirates random spot actually worked well since I got this Tyler Glasnow dual relic #10/25 from the Diamond Kings box. 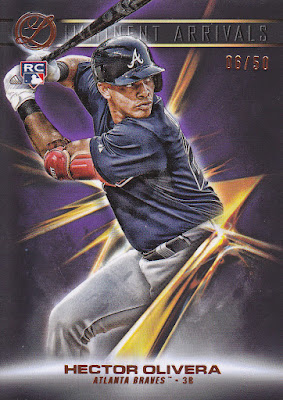 I also got this nice Hector Olivera card from the Topps Legacies box. The card is pretty nice. It uses thick cardstock and has nice coloring. However there is one big issue with the card, it has Hector Olivera on it. One of the worst acquisitions by the Braves in recent memory. Thank goodness they managed to unload the domestic abuser to the Padres and got someone who can maybe still contribute at the major league level in Matt Kemp.

The next  group break I joined was Crackin' Wax's 2016 Allen & Ginter case break. This time I was lucky enough to see the email that the break was open shortly after he sent it and I grabbed the Braves before anyone else could. Again I didn't expect much since the Braves were represented pretty thinly on the checklist. I wasn't able to watch the break so I just waited for the cards to arrive to see what I got. Lo and behold, I got a hit!!!!! 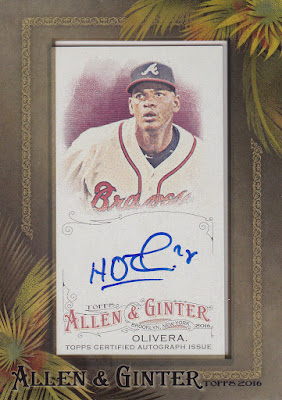 
I can't seem to get away from this guy.

Chris is a cool guy though and often fills out the team bags with other cards of your team. This time one of the cards he included was this nice numbered Chipper Jones card from Upper Deck Ultimate Collection. This card fits into my collection better than any card pulled for me in all of the breaks. Thanks Chris! 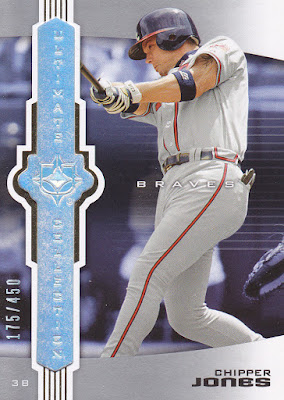 So...Olivera. If any Padres collector, or anyone really, is interested in the two Olivera cards above as well as the 2016 Museum auto/relic below, they are available for trade. They have no place in my collection. 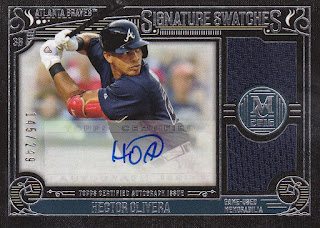